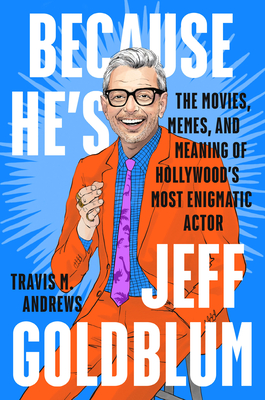 Praise For Because He's Jeff Goldblum: The Movies, Memes, and Meaning of Hollywood's Most Enigmatic Actor…

"In Because He's Jeff Goldblum, Travis Andrews leads fans on a tour of Goldblum's unconventional career and cultural resonance with all the wit and charm of the actor himself."
—Jennifer Keishin Armstrong, New York Times bestselling author of Seinfeldia

"Jeff Goldbum is the only man in Hollywood capable of selling himself as a heinous human/insect hybrid, a leather jacket-clad mathematician/dinosaur expert and the Grandmaster of the Avengers universe. Travis M. Andrews's Because He's Jeff Goldblum is a brilliant, fascinating deep dive into Goldblum's life and career, revealing that he's even smarter, funnier and weirder than we dared to hope."
—Andy Greene, New York Times bestselling author of The Office

"Quirky, chatty, off-the-cuff, self-mocking, and fantastically enjoyable, Travis M. Andrews’ Because He’s Jeff Goldblum is like a book-form version of the actor and cult hero himself. It’s like an extended conversation with the fantastically strange leading man from Jurassic Park and Independence Day, incorporating everything from the acting philosophy of Sanford Meisner to the competition for the world’s biggest Goldblum fan. It is inside-out biography, pop-culture criticism with pizzazz, and it is, like the actor himself, nothing but sheer pleasure to encounter."
—Saul Austerlitz, author of Generation Friends

"Travis Andrews takes the same, joyous approach with which Jeff Goldblum seems to live every minute of his waking life. Deeply reported, smartly analyzed and unpredictable in its own right, this book gets to the heart of what makes Goldblum a singular figure in American culture without forgetting to have fun."
—Geoff Edgers, author of Walk This Way

"Travis M. Andrews colorfully and entertainingly deciphers the allure of the Jurassic Park and Independence Day star."
—Yahoo, The It List

“Andrews’ first book examines the life and work of the irresistible Goldblum with a light touch and a sardonic sense of humor.”
—Booklist

"Andrews debuts with a gushing biography and cultural consideration of Jeff Goldblum... those similarly smitten with Goldblum will surely appreciate this lark."
—Publishers Weekly

Travis M. Andrews is a features writer for the Washington Post’s Style sec­tion, where he covers the Internet, pop culture, and the ways we live now. Previously he was an associate travel and culture editor for Southern Living and a contributing pop culture reporter for Mashable and The Week. He has also written for Time, Esquire, GQ, and the Atlantic, among others. He lives in Washington, DC, where he acquiesces to the every wish of his puppy, Stevie Nix, and misses his native New Orleans.
Loading...
or support indie stores by buying on