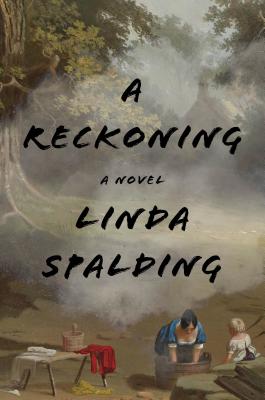 It’s 1855, and the Dickinson farm, in the bottom corner of Virginia, is already in debt when a Northern abolitionist arrives and creates havoc among the slaves. Determined to find his mother and daughter, who are already free in Canada, Bry is the first slave to flee, and his escape inspires a dozen others. Soon, the farm, owned by one brother and managed by another, is forfeited to the bank.

One of the brothers, who is also a circuit-riding preacher, gathers his flock into a wagon train to find a new life in the west. But John Dickinson has a dangerous secret that compels him to abandon the group at the last minute, and his wife, two daughters, and thirteen-year-old son, Martin, now face life on the trail and an unknown future alone. After a fateful encounter along the way, Martin and Bry will hatch a plot to get Bry safely to Canada, but each member of the family will be changed, tormented, excited, and exposed by the journey.

Linda Spalding brings an astonishing empathy to the telling of the fate of each of the travelers and to their shifting inner lives—compoundedof grief, fear, anger, and hope. Rich in character and incident, A Reckoning brilliantly-creates an America that was: the undefiled beauty of its lands and the grand mix of settlers and Native Americans; blacks and whites; riverboat captains, small businessmen, and people leaving one life behind for another they can only just begin to see. It moves with irresistible force toward an ending at once cataclysmic, inevitable, and profound.

Praise For A Reckoning: A Novel…

“Spalding’s timely, historically sensitive sequel to The Purchase (2013), a literary saga which also confidently stands alone, explores the ramifications of slavery on the next generation of the Dickinson family. An abolitionist’s arrival on their southwestern Virginia farm in 1855 sparks the dissolution of their longtime way of life. Some enslaved men escape. Without their labor, the crops fail and money grows tight, fomenting conflict between circuit-riding preacher John and his cruel half-brother, Benjamin, who owns their land and slaves. The narrative then turns adventurous as it follows several people, including John’s wife, Lavina, 13-year-old son, Martin, and an escaped slave, Bry, as their journeys away from Jonesville unite and diverge. The characters are full-fledged individuals whose mind-sets reflect their time and place. John is enamored of their African American housekeeper and imagines she loves him in return, while Lavina is an intriguing mix of independence and feminine conformity. For John’s family, it’s also noteworthy that the unspoiled American landscape, spectacularly described in its glory and dangers, offers a spirituality and freedom absent from his controlling form of religion.” —Sarah Johnson, Booklist

“An engrossing, deftly crafted narrative . . . A Virginia family suffers poverty and sorrow as slavery tears their world apart . . . As the characters struggle to survive, they discover that redemption is elusive and forgiveness, hard-won.”
—Kirkus Reviews

“What a brilliant and harrowing book! Everyone thinks they know the epic story of early nineteenth-century America, of the covered wagons and the way west; A Reckoning will persuade you that you don’t. For one thing, it is the story of families—for another, it was written over the politics of slavery. Riverboats, rutted forest roads, slave catchers, con men, sick mules, broken axles, lost children. There is something of Mark Twain in this telling and something of Willa Cather, a narrative as ingenious in its mix of points of view as Faulkner’s As I Lay Dying and full of enough to keep anyone turning pages. And at the heart of it is the portrait of a remarkably strong woman and a painfully rich portrait of a marriage and a family.”
—Robert Hass

“A dark and mythopoetic novel . . . that stands apart for its texture, moral nuance, and the somber earthy prose.”
—The Globe and Mail

“A beautiful and brilliant work of art, vulnerable, driven, and unsettling. A humane and timely examination of how the societies we create—just or profoundly unjust—set the parameters for the people we become. Extraordinary.”
—Madeleine Thien

LINDA SPALDING was born in Kansas and lived in Mexico and Hawaii before immigrating to Canada in 1982. She is the author of four critically acclaimed novels, The Purchase (awarded Canada’s Governor General’s Literary Award), Daughters of Captain Cook, The Paper Wife, and (with her daughter Esta) Mere. Her nonfiction includes A Dark Place in the Jungle, Riska: Memories of a Dayak Girlhood, and Who Named the Knife. In 2003 Spalding received the Harbourfront Festival Prize for her contribution to the Canadian literary community. She lives in Toronto, where she is an editor at Brick magazine.

1. What does the title, A Reckoning, mean and refer to? Who is making a reckoning and why?

2. What is the role of Alexander Ross, the Canadian abolitionist, naturalist, and medical student who arrives in Jonesville? How does he affect the lives of everyone around him? Why does the novel open with him?

3. Compare and contrast the two brothers John, the preacher, and Benjamin, the land and slave-owner. What does each do with the legacy of their father? How do their views of slavery agree and differ? And how substantial is this difference?

4. What reasons make John feel it necessary to send his family on a journey to the west with other members of their religious community, while he stays behind?

5. What happens to Lavina on the trip to Kansas? How has she found “a piece of herself she didn’t know” (p. x). Is this a complete transformation or does she return to the old Lavina after John returns? Why? Why doesn’t Lavina leave John?

6. The trip also transforms Martin who says, “My father is wrong about everything. Dominion is not the point” (p. x). What does he mean? Dominion over what? People? Nature? Family?

8. How does Bry’s journey north to Canada compare and contrast with the journeys of the Dickinson family to Kansas?

11. What do you think is the most important scene in the novel? Why?

12. What do you think of the ending of A Reckoning? What does it mean and is it satisfying or intriguing as an ending? Why does Spalding end the novel this way?

13. Describe the different female characters, Lavina, Emly, Matilda and the Native American woman who helps Bry. How are they each women of their time and place in society and how are they universal? What do they share and how are they different?

14. There are abundant passages about the natural world in the novel. “And the world announced itself. The rhododendrons were opening beside them; the azaleas were ready to burst; the birds were finding each other after a long winter of waiting” (p. 139). Why these descriptions of nature? How does it add to or contrast with actions of the people?

15. “We are born in ignorance and must make ourselves civil,” John as preacher always said, but his son Martin discovers that Cuff the bear is “true to her nature rather than ignorant” (p. 210). How do these two different views provide a commentary on human nature and the novel?

16. Why does John send Martin out to kill his bear? What is the significance of the order and of what happens afterward?

17. What is the role and importance of religion in the novel?

18. What is Bry’s relationship to the other characters in the novel? How does this inform your reading of this novel and does it affect your view of Bry?  If you’ve read The Purchase, how has your opinion of him grown or changed?

19. How does Bry escape to Canada? Who and what does he need to rely on though he tries to be self-sufficient?

20. Emily Donaldson (Globe and Mail) writes, “Perhaps what makes her novel germane to the current moment is how little has changed in race and gender relations, not how much.” Comment on this and discuss whether you agree with this statement or not.