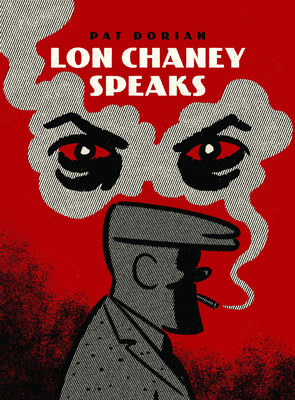 A stunning graphic debut: the life of the legendary silent-film actor Lon Chaney (the original Phantom of the Opera and Hunchback of Notre Dame), as imagined by an artist whose work recalls the style and skill of early-era New Yorker cartoonists.

From the artist: "'No one will ever love me!' I believe it was this near-universal fear that makes Lon Chaney's characters continue to resonate with us today. On their surface, most of them are distinctly unlikeable: they are monsters, outcasts, criminals. But through his unique magic, Chaney makes them empathetic. He pioneered the craft of makeup artist long before that term ever existed, and he used his expertise to hide himself from public view--what if nobody loved him?"

PART OF THE PANTHEON GRAPHIC LIBRARY

“I’m a lifelong fan of 1920s films, and so this book is a dream come true: a thoroughly researched, lively, empathic biography of a screen icon who haunted my childhood. Lon Chaney was wholly devoted to—immersed in and perhaps engulfed by—his art. This fascinating tale is lovingly told, chock-full of details, and snappily rendered, with nods to classic cartooning throughout.”
—Ivan Brunetti, author of Cartooning: Philosophy and Practice

"Dorian has an appealingly jaunty style, his bold lines . . . enhance each chapter with a single color of ink—bloody rose, shrieking violet, cool green—in a way that recalls how the sections of long black-and-white films are sometimes digitized with different hues. The delightful endpapers feature Dorian’s take on vintage film ads, as though the artist’s affection for his subject can’t be contained in the story itself . . . Lon Chaney Speaks serves as a sumptuous introduction to silent cinema’s most startling weirdo, for whom the torments of the bodyexpressed what the voice could not."
—The New York Times

“[C]aptures the voice and soul of Lon Chaney. . . [What Pat] Dorian calls “an imagined biography”. . . doesn’t fully convey the power of this impressively ambitious work of imagination.”
—Kirkus Reviews

“Dorian’s bold illustrations match the broad strokes of his debut, an “imagined biography” of film legend Lon Chaney . . . Dorian’s nostalgic drawing style, reminiscent of cartooning great Syd Hoff, is energetic and accessible. This spirited homage honors Chaney’s life, as well as the silent film era in which he formed his legacy, appealing to cinema and comics fans alike.”
—Publisher’s Weekly

“Dorian evokes Chaney’s personality in richly detailed scenes made even more impressive by the fact that an introductory note stresses that his subject’s extreme aversion to divulging details of his private life necessitated that this be “an imagined biography” inspired by real events and research.”
—Library Journal

“A stunning graphic debut: the life of the legendary silent-film actor Lon Chaney (the original Phantom of the Opera and Hunchback of Notre Dame), as imagined by an artist whose work recalls the style and skill of early-era New Yorker cartoonists.”
—Comics Beat

“A stunning graphic debut: the life of the legendary silent-film actor Lon Chaney, as imagined by an artist whose work recalls the style and skill of early-era New Yorker cartoonists . . . With just a few bold, distinct lines, Dorian manages to bring his characters to vibrant life with a less is more approach that not only looks contemporary to the era for when the book takes place, but is also just a joy to look at. Cartoony and expressive, Dorian’s storytelling is sharp and succinct, and he rarely relies on more than just a few panels each page. This fairly minimalist approach to the book is a pleasing experience . . . inviting to the eye, an intriguing prospect to longtime comic readers and neophytes alike.”
—Multiversity Comics

“A charming “graphic biographical novel,” . . . of the great star of silent cinema. Graphic in the telling, comic book style, but of course more sophisticated in content, design, and layout . . . Beautifully humanizes a brilliant man who is known to us chiefly in the grotesque makeup he’s hidden by in old film posters and stills.”
—Sullivan County Democrat

“There’s no real downside to.Lon Chaney Speaks. It capsulizes his life just enough . . . Necessarily episodic due to length restrictions, it hits all the high notes in the story of the silent star’s life and career . . . [D]ifferent sections of the volume are colored in different single-color variations . . . [Dorian] is a brilliant storyteller.”
—Forces of Geek

PAT DORIAN is a cartoonist whose illustrations have been featured in The New Yorker, The New York Times, Mad Magazine, and other national publications. His animation work includes projects for Cartoon Network, Comedy Central, and PBS. He teaches at the Pratt Institute and School of Visual Arts in New York. His graphic biography Lon Chaney Speaks was published by Pantheon Books in 2020.
Loading...
or
Not Currently Available for Direct Purchase