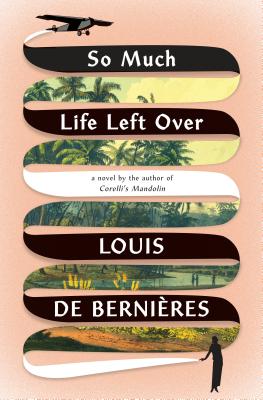 So Much Life Left Over

They were an inseparable tribe of childhood friends. Some were lost to the battles of the First World War, and those who survived have had their lives unimaginably upended. Now, at the dawn of the 1920s, they’ve scattered: to Ceylon and India, France and Germany, and, inevitably, back to Britain, each of them trying to answer the question that fuels this sweeping novel: If you have been embroiled in a war in which you confidently expected to die, what are you supposed to do with so much life unexpectedly left over? The narrative unfolds in brief, dramatic chapters, and we follow these old friends over the decades as their paths re-cross or their ties fray, as they test loyalties and love, face survivor’s grief and guilt, and adjust in profound and quotidian ways to this newest modern world.

At the center are Daniel, an RAF flying ace, and Rosie, a wartime nurse. As their marriage is slowly revealed to be built on lies, Daniel finds solace—and, sometimes, family—with other women, and Rosie draws her religion around herself like a carapace. Here too are Rosie’s sisters—a bohemian, a minister’s wife, and a spinster, each seeking purpose and happiness in her own unconventional way; Daniel’s military brother, unable to find his footing in a peaceful world; and Rosie’s “increasingly peculiar” mother and her genial, shockingly secretive father. The tenuous interwar peace begins to shatter, and we watch as war once again reshapes the days and the lives of these beautifully drawn women and men.

Praise For So Much Life Left Over: A Novel…

“As with superlative World War I literature from Pat Barker’s Regeneration trilogy to Sebastian Faulks’s Birdsong to Louisa Young’s My Dear I Wanted to Tell You, the horrors are vividly evoked. De Bernières is adept at describing how lives can be devastated in minutes . . . Powerful . . . Delightful . . . [With] plenty of Dickensian social observation.”—The Independent

“The author drops us right in the trenches, and he shies away from no gruesome detail. But he does it with a delicate touch, weaving a gently evocative story of the war that didn’t end all wars but did wrench open the door to the modern world . . . What makes this a good war novel, though, is not its depictions of conflict but its reckoning with what comes after.”—Time

“Had me laughing, cringing, and ultimately feeling a little spark of hope.”—Star Tribune (Minneapolis)

“A book in which readers will happily immerse themselves.”—The Scotsman

“A feast of a novel.”—The Times (London)

LOUIS DE BERNIÈRES is the author of many award-winning novels, including Birds Without Wings, Corelli’s Mandolin, The Dust That Falls from Dreams, Notwithstanding, A Partisan’s Daughter, Red Dog, Señor Vivo and the Coca Lord, The Troublesome Offspring of Cardinal Guzman, and The War of Don Emmanuel’s Nether Parts. Selected by Granta as one of the twenty Best of Young British Novelists in 1993, de Bernières lives in England.

1. The dedication to the novel is to the author’s grandparents with the added phrase “who tried to start a new life in Ceylon.” Does knowing that the novel is loosely based on the author’s family affect your reading of the story?

2. The novel is told in brief, episodic chapters (50 in total) with various voices and numerous letters rather than one continuous chronological story. How does this add to the experience of reading the novel?

3. Is the legacy of WWI different for the male and female characters in the book?

4. How are both Archie and Rosie, in very different ways, unable to fully recover and move on with their lives after WWI? About Archie, the narrator says, “There is nothing more soul destroying for a valiant old soldier than to live inside a crippling sense of uselessness” (p. 314). Why is Daniel able to move on, as opposed to his wife and brother?

5. Discuss Rosie and Daniel’s relationship. Why are they both unhappy and unfulfilled in their marriage? What power do they have over the other and how do they exert it?

6. How does the trauma of their baby being born deformed and dying soon after affect Rosie and Daniel similarly and differently?

8. How is setting a character in the novel? How does the English countryside with its large houses and gardens contrast with the Ceylon landscape with its tea plantations and colonial houses and surrounding workers’ huts?

9. Discuss the role of technology and the changing and new machines that emerged during and after the war. How have motorcycles, cars, and airplanes changed the lives of the characters and society in the novel?

10. How is So Much Life Left Over a book about marriages, families, and family secrets? Discuss the various marriages represented in the book, and how family secrets affect them.

11. Should Daniel and Rosie divorce? Would they both be better off apart? Should Rosie have married Archie instead? Would either Rosie or Archie have been healthier? Should Rosie have remained single after her beloved died in the war?

13. Why does Rosie read and destroy Daniel’s letter from Ceylon rather than share it with him? Is her betrayal justified?

14. How did coming-of-age during the war affect these characters—their interests, their personalities, their relationships, and lives?

15. How does Daniel deal with his depression and suicidal thoughts?

16. What does Rosie mean when she says, “Inside one person there are so many different people, and quite often they’re at war with each other . . . We’re all so hard to understand, aren’t we” (p. 132)? Do you agree with this? What does this quote say about Rosie?

17. Describe the differences between Rosie’s parents’ generation and the characteristics of Rosie’s generation. Why does Rosie’s mother put up with her husband’s rampant philandering? Or do you think she didn’t know or care about it? Are appearances the only thing she cares about?

18. What is the general stance on religion in the novel? Discuss one character’s assessment that “Theology is the feeble wisdom of those who are terrified of mystery” (p. 307).

19. And Daniel’s view on religion and life: “If you have no faith, there is no meaning in anything unless you put it there yourself” (p. 325).

20. What is the book saying about empire and colonialism? There’s a line from Gaskell about how her family became so wealthy—“It was the good old golden triangle . . . My wonderful house and my fabulous estate are all the fruit of untold family misery” (p. 159). At a time when the British Empire was starting to collapse the country still had a presence in many places around the world. Why is Archie in the Middle East and Daniel in South Asia?

21. “There is a kind of man who, having been at war, finds peacetime intolerable . . . he hates the feeling that what he is doing is not important” (p. 6). Discuss this quote from the beginning of the novel and how it relates to the novel as a whole.

22. What did you think of the ending of So Much Life Left Over?