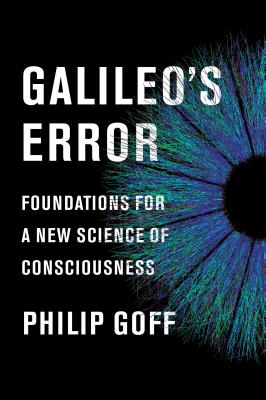 Foundations for a New Science of Consciousness

From a leading philosopher of the mind comes this lucid, provocative argument that offers a radically new picture of human consciousness—panpsychism.

Understanding how brains produce consciousness is one of the great scientific challenges of our age. Some philosophers argue that consciousness is something "extra," beyond the physical workings of the brain. Others think that if we persist in our standard scientific methods, our questions about consciousness will eventually be answered. And some even suggest that the mystery is so deep, it will never be solved. Decades have been spent trying to explain consciousness from within our current scientific paradigm, but little progress has been made.

Now, Philip Goff offers an exciting alternative that could pave the way forward. Rooted in an analysis of the philosophical underpinnings of modern science and based on the early twentieth-century work of Arthur Eddington and Bertrand Russell, Goff makes the case for panpsychism, a theory which posits that consciousness is not confined to biological entities but is a fundamental feature of all physical matter—from subatomic particles to the human brain. In Galileo's Error, he has provided the first step on a new path to the final theory of human consciousness.

Praise For Galileo's Error: Foundations for a New Science of Consciousness…

“In Galileo’s Error, Philip Goff argues for a new approach to the scientific study of consciousness. He offers an accessible and compelling analysis of why our felt experience continues to elude scientific explanation and why the theories that describe consciousness as a fundamental feature of matter have been neglected—and why they now deserve serious consideration. This is a must-read for anyone interested in the future of consciousness studies.”
—Annaka Harris, best-selling author of Conscious: A Brief Guide to the Fundamental Mystery of the Mind

“This is one of the clearest accounts I've ever read about the mystery of consciousness, and the way in which one theory about it, panpsychism, does a great deal to explain how it occurs and what it is. Why shouldn't consciousness be a normal property of matter, like mass or electrical charge? This idea has the glorious simplicity of our first realization that the earth goes around the sun, and not vice versa. Suddenly the universe appears in a new and much more revealing perspective. Philip Goff's book is altogether a splendid introduction to this fascinating idea.”
—Philip Pullman, author of the “His Dark Materials” series

“Philip Goff’s new book, Galileo’s Error, introduces the public to a revolutionary approach to one of the most stubborn of mysteries: how does the brain, with its chemical and electrical processes, give rise to a mind, whose thoughts, emotions, colors and tones we apprehend directly?  In this provocative, brave and clearly written book, Goff makes a compelling case for an initially absurd thesis: that the colors we perceive are instances of universal qualities hidden within all material processes.”
—Lee Smolin, author of Einstein’s Unfinished Revolution and founding member of the Perimeter Institute for Theoretical Physics

“Galileo’s Error is a manifesto for a new generation of philosophers who think we need to revise our view of the physical world to accommodate consciousness. Galileo took the mind out of matter, which was good for the science of matter but not so good for the science of the mind. Philip Goff thinks that to explain consciousness, we have to put the mind back into matter. His ideas are radical, but his arguments are rigorous and the book is a pleasure to read. I recommend it to anyone who wants to come to grips with mystery of consciousness.”
—David Chalmers, author of The Conscious Mind and Professor of Philosophy at New York University

“Goff's elegant book offers a thought-provoking, inspiring picture of the nature of mind. His spirited defense of panpsychism moves well beyond the usual academic discussions, mulling over our place in the larger universe.”
—Susan Schneider, author of Artificial You: AI and the Future of Your Mind

“Galileo’s Error is a tour de force. Goff defends his distinctive view of consciousness with verve, wit and authority, and for good measure adds an even-handed account of alternative views and a graphic introduction to the surrounding science. It is hard to imagine a better introduction to current debates about consciousness.”
—David Papineau, author of Thinking about Consciousness and Professor of Philosophy of Science at King's College London

“Galileo’s Error is an exciting and provocative book, which argues for the revolutionary view that all matter is conscious. Goff writes with clarity and passion, and whether you agree or disagree with his conclusions, you will find his book enjoyable, engaging, and deeply thought-provoking.”
—Keith Frankish, editor of Illusionism: as a Theory of Consciousness and Honorary Reader in Philosophy, University of Sheffield

“Philip Goff has written an extraordinarily accessible and entertaining book introducing and defending an increasingly popular, if on the face of it outlandish, claim: that consciousness is everywhere. Matter doesn’t somehow magically become conscious depending on how it’s arranged; rather the consciousness is there from the start. There’s no better introduction to this fascinating subject.”
—Stephen Law, author of The Great Philosophers: The Lives and Ideas of History’s Greatest Thinkers

PHILIP GOFF is a philosopher who teaches at Durham University. He is the author of Consciousness and Fundamental Reality and has published more than forty academic papers. His writing has also appeared in many newspapers and magazines, including The Guardian and The Times Literary Supplement, and he has guest-edited an issue of Philosophy Now. He lives in Durham, England.
Loading...
or
Not Currently Available for Direct Purchase