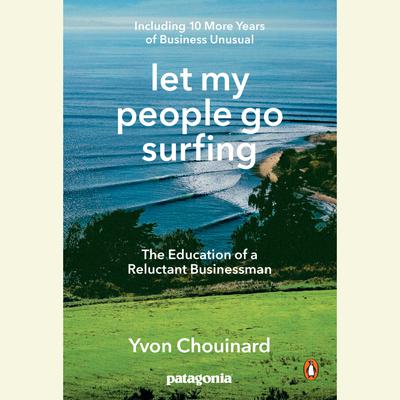 In his long-awaited memoir, Yvon Chouinard-legendary climber, businessman, environmentalist, and founder of Patagonia, Inc.-shares the persistence and courage that have gone into being head of one of the most respected and environmentally responsible companies on earth. From his youth as the son of a French Canadian blacksmith to the thrilling, ambitious climbing expeditions that inspired his innovative designs for the sport's equipment, Let My People Go Surfing is the story of a man who brought doing good and having grand adventures into the heart of his business life-a book that will deeply affect entrepreneurs and outdoor enthusiasts alike.


With a Preface to the Second Edition, Introduction, and Epilogue read by the Author

Yvon Chouinard is the founder and owner of Patagonia, Inc., based in Ventura, California.  He began in business by designing, manufacturing, and distributing rock climbing equipment in the late 1950s. His tinkering led to an improved ice ax that is the basis for modern ice ax design. In 1964 he produced his first mail-order catalog, a one-page mimeographed sheet containing advice not to expect fast delivery during climbing season. In 2001, along with Craig Mathews, owner of West Yellowstone's Blue Ribbon Flies, he started One Percent for the Planet, an alliance of businesses that contribute at least 1 percent of their net annual sales to groups on a list of researched and approved environmental organizations.