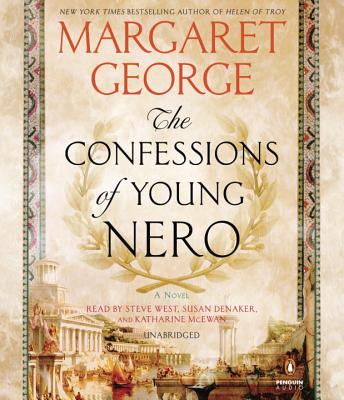 The Confessions of Young Nero (CD-Audio)

The New York Times bestselling and legendary author of Helen of Troy and Elizabeth I now turns her gaze on Emperor Nero, one of the most notorious and misunderstood figures in history.

Built on the backs of those who fell before it, Julius Caesar’s imperial dynasty is only as strong as the next person who seeks to control it. In the Roman Empire no one is safe from the sting of betrayal: man, woman—or child.

As a boy, Nero’s royal heritage becomes a threat to his very life, first when the mad emperor Caligula tries to drown him, then when his great aunt attempts to secure her own son’s inheritance. Faced with shocking acts of treachery, young Nero is dealt a harsh lesson: it is better to be cruel than dead.

While Nero idealizes the artistic and athletic principles of Greece, his very survival rests on his ability to navigate the sea of vipers that is Rome. The most lethal of all is his own mother, a cold-blooded woman whose singular goal is to control the empire. With cunning and poison, the obstacles fall one by one. But as Agrippina’s machinations earn her son a title he is both tempted and terrified to assume, Nero’s determination to escape her thrall will shape him into the man he was fated to become—an Emperor who became legendary.

With impeccable research and captivating prose, The Confessions of Young Nero is the story of a boy’s ruthless ascension to the throne. Detailing his journey from innocent youth to infamous ruler, it is an epic tale of the lengths to which man will go in the ultimate quest for power and survival.

Margaret George is the New York Times bestselling author of six novels of biographical historical fiction, including Elizabeth I, Helen of Troy, Mary, Called Magdalene, The Memoirs of Cleopatra, The Autobiography of Henry VIII, and Mary Queen of Scotland and the Isles. She also has written a children’s book, Lucille Lost.

"Margaret George has an incredible talent in that she can stand in the shoes of her protagonist and speak in his or her voice.”—Barbara Taylor Bradford, author of The Cavendon Luck and A Woman Of Substance
or
Not Currently Available for Direct Purchase
Copyright © 2020 American Booksellers Association