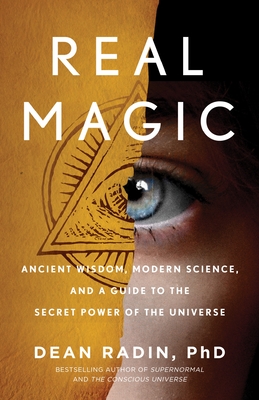 Ancient Wisdom, Modern Science, and a Guide to the Secret Power of the Universe

The chief scientist at the Institute of Noetic Sciences (IONS) turns a critical eye toward such practices as telepathy, clairvoyance, precognition and psychokinesis. Are such powers really possible? Science says yes.

According to noted scientist and bestselling author of The Conscious Universe, Dean Radin, magic is a natural aspect of reality, and each of us can tap into this power with diligent practice.

But wait, aren't things like ESP and telepathy just wishful thinking and flights of the imagination? Not according to the author, who worked on the US government's top secret psychic espionage program known as Stargate. Radin has spent the last forty years conducting controlled experiments that demonstrate that thoughts are things, that we can sense others' emotions and intentions from a distance, that intuition is more powerful than we thought, and that we can tap into the power of intention (think The Secret, only on a more realistic and scientific level). These dormant powers can help us to lead more interesting and fulfilling lives.

Beginning with a brief history of magic over the centuries (what was called magic two thousand years ago is turning out to be scientific fact today), a review of the scientific evidence for magic, a series of simple but effective magical techniques (the key is mental focus, something elite athletes know a lot about), Radin then offers a vision of a scientifically-informed magic and explains why magic will play a key role in frontiers of science.

Praise For Real Magic: Ancient Wisdom, Modern Science, and a Guide to the Secret Power of the Universe…

“A thought-provoking book. The author makes a convincing case for the reality and significance of magic.” —Brian Josephson, Nobel Laureate in Physics and Emeritus Professor of Physics, University of Cambridge

“The modern scientific world is experiencing a radical shift in its understanding of our reality, originating in the deep mystery of quantum physics almost a century ago, and maturing through the refinement of the mind-brain relationship, and of the very nature of consciousness. In Real Magic, Dean Radin, as one of the world’s leading scientific investigators of this exciting frontier, reveals the detailed nature of this world-changing mindscape in an arena that many will find illustrative of the true potential of this new dawn of understanding: the reality of certain forms of “magic,” as we come to a far more powerful manifestation of our free will, and a much deeper knowing of the natural world and of our powers on emerging reality. Highly recommended!" —Eben Alexander M.D., author of Proof of Heaven and co-author of Living in a Mindful Universe

“Filled with fascinating facts and intriguing ideas, Real Magic places the laboratory findings from parapsychology in the broader context of centuries of magic practices.  This wholly original work then points toward new understandings of reality that can no longer be ignored.” —Jim B. Tucker, M.D., author of the New York Times bestseller Return to Life: Extraordinary Cases of Children Who Remember Past Lives

“Real Magic illustrates the limitations of 20th century science and proposes a more comprehensive view that incorporates ideas that have been associated with magic throughout the ages. Blending history, humor, and plausible hypotheses, Dean Radin illustrates that there is a staggering amount of evidence for a broader view of science that offers hope for the future of humanity.” —Jessica Utts, Professor of Statistics, University of California, Irvine and 2016 President of the American Statistical Association

“Dean Radin writes about all those scientifically and experimentally proven findings that for most people, are beyond imagination, mysterious, or even impossible. This is what Radin calls ‘magic’. Everybody and everything are always interrelated, interacting, and interconnected, beyond time and space. To better understand this challenging new worldview we need a new paradigm in science. Highly recommended.” —Pim van Lommel, cardiologist, author of Consciousness Beyond Life

“Knowing Dean Radin’s scientific work (and appreciating his sense of humor!), I knew I’d like Real Magic, but after the first page I was hooked and read the whole book in a day.  Parapsychologists have too often gotten stuck in abstractions about psychic abilities, but Radin now situates parapsychology where it belongs: it’s about magic.  And magic is about humanness and our spiritual nature, not just spells and love potions. Read, enjoy, learn!” —Charles T. Tart, Ph.D., Emeritus Professor of Psychology, University of California, Davis; Emeritus Faculty, Institute of Transpersonal Psychology, Palo Alto, CA.

“Real Magic will be known as one of the few real paradigm-changing works of science. Radin builds a case, supported by plenty of data as well as by theoretical ideas that are all real and can be studied. Consciousness is the foundation of everything. This is what makes magic so real—it will be the new science. A very delightful book, highly recommended.” —Menas C. Kafatos, co-author of the New York Times bestselling You Are the Universe and Professor of Computational Physics, Chapman University

“The real magic of Dean Radin is that he continually insists on a clear eyed, fact based assessment of the accumulating data that 'real magic' is real. The delightful, easily flowing nature of his text - covering complex histories of magic and high level scientific analyses - is, itself, magical.” —Neil Theise, MD, Professor of Pathology at NYU School of Medicine

“Dean Radin shows how even a weighty subject like the nexus of esoteric ideas and modern science can still be an entertaining, easy read. He teaches us here that real magic is not a regression to ancient superstition, but rather an intriguing and surprisingly persuasive anticipation of future science.” —James Fallon, Professor, Psychiatry & Human Behavior School of Medicine, University of California, Irvine

“With scientific precision and an expanded model of consciousness based on many years of patient experimentation, Real Magic explores the new frontiers of what passes for "reality" in our modern world of quanta, entanglement and multiple dimensions. Magic is the ancient source of modern science: it reflects humanity's desire to control its environment and life itself. With clear
thought and welcome humor—a rare commodity in this field—Dean Radin shows that the study of magic is not only a matter of historical curiosity; it also holds an important key to future knowledge of ourselves and the universe our thoughts create." —Jacques Vallee, PhD, computer scientist, venture capitalist

“Real Magic is a philosophical and scientific milestone. Dean Radin explores the history and foundations of magic, proposing a worldview uniquely appropriate for the challenges of the 21st century. This book is a brilliantly organized bridge that spans the esoteric traditions, magical lore, parapsychology, and contemporary science.” —Stanley Krippner, Professor of Psychology, Saybook University

“We have entered an age when simple artificial neural networks (ANNs), with only a few hundred neurons, outperform humans in more and more tasks, forcing more and more people out of jobs and seriously threatening our future. How can a simple system of a thousand neurons outperform humans with billions of neurons and, as many of us believe from inescapable experience, some kind of real soul? The answer is that NNs are usually designed to focus. We, too, need to develop our own fullest ability to focus our own minds in order to keep up, to connect with each other better, and to survive and grow as a species. I commend Dean Radin for his efforts in Real Magic to extract what many esoteric traditions from all over the world have learned through time, to help us train ourselves to focus the full powers of our minds, and for moving us forward (like Freud and Jung) on the long, difficult, but all-important road to bring this line of inquiry into the forefront of science.” —Paul Werbos, PhD, former program director of the National Science Foundation

"Some scientists are confident that we already know what is and is not possible. But the truth is that science is very much in its infancy. To advance our understanding requires bold excursions into domains some might consider heretical, including esoteric legends about magic that have persisted for thousands of years. This is what Dean Radin sets out to do with Real Magic. In my judgment, it succeeds in blazing new trails. Well worth the read." —Kary Mullis PhD, Nobel Laureate (Chemistry)

“There is a tacit agreement in conventional science to deny, ignore, and remain silent about the most astonishing fact of our lives: the capacity of our consciousness to shape our existence and the so-called physical world. This is the equivalent of blind men refusing the gift of vision. In Real Magic, Dean Radin challenges us to abandon this childish pretense, this taboo, not on the basis of faith but of science itself. Our future likely depends on how we respond to the key messages in Real Magic.” —Larry Dossey, MD, author of One Mind: How Our Individual Mind is Part of a  Greater Consciousness and Why It Matters

“Scientists tend to be critical of the scholars who reputedly refused to look through Galileo’s telescope. In Real Magic, Dean Radin lays out impressive evidence that ‘there are more things in Heaven and Earth’ than are dreamed of in 21st century physics. How will this story end? Will 21st century physicists prove to be more like Galileo, or more like his opponents?” —Peter Sturrock, PhD, emeritus professor of physics, Stanford University, and author of Late Night Thoughts About Science

"The book Real Magic gives a fascinating insight into both the historic and modern perspectives of magical practice.  The modern ‘magic’ that Dean Radin refers to embodies a range of ‘psi’ phenomena whose occurrence is stubbornly statistically significant.  Their magnitude may be modest, but after hundreds of thousands of high quality experiments, instances of remote viewing and precognition for example, are persistent outcomes that cannot be explained away by chance or poor methodology.  From a conventional scientific point of view these are anomalies that do not fit the existing paradigm.  For Dean Radin these phenomena are an inevitable consequence of a universal consciousness that underpins the very fabric of space-time itself.  For most of us the myriad distractions of the everyday world dull our senses, but with concerted effort, yoga and meditation, it seems that gifted individuals might be capable of amazing things.  But as Radin says “Magic is real, but no one said it’s going to be fast or easy.” —Dr Steve Boreham, University of Cambridge

DEAN RADIN, Ph.D., is Chief Scientist at the Institute of Noetic Sciences (IONS) and Distinguished Professor at the California Institute of Integral Studies. For nearly four decades he has been engaged in consciousness research. Before joining the research staff at IONS in 2001, he held appointments at AT&T Bell Laboratories, Princeton University, and several Silicon Valley think tanks, including SRI International, where he worked on a classified program investigating psychic phenomena for the U.S. government.
Loading...
or
Not Currently Available for Direct Purchase