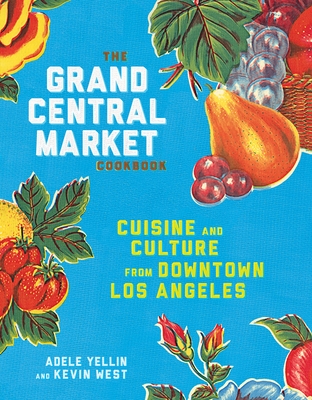 Founded in 1917, Grand Central Market is a legendary food hall in Downtown Los Angeles that brings together the many traditions and flavors of the city. Now, GCM’s first cookbook puts the spotlight on unique recipes from its diverse vendors, bringing their authentic tastes to your home kitchen. From Horse Thief BBQ’s Nashville-Style Hot Fried Chicken Sando to Madcapra’s Sumac Beet Soda to Golden Road’s Crunchy Avocado Tacos, here are over 85 distinctive recipes, plus spectacular photography that shows off the food, the people, and the daily bustle and buzz. Stories about the Market’s vibrant history and interviews with its prominent customers and vendors dot the pages as well. Whether you’ve visited and want to make your favorite dishes at home, or are simply looking for a cookbook that provides a plethora of multi-national cuisine, The Grand Central Market Cookbook is sure to make your kitchen just a little bit cooler.

“This cookbook is straight-up a murderer's row of some of the best food in Los Angeles.” –LAist

"The market has always been in flux, the authors write in their introductory pages. What has stayed relatively constant, though, is the overall spirit of the space, and the book reflects it well — and with it, the spirit of L.A." –LA Times

“After moving to LA I quickly discovered that Grand Central Market was the ultimate culinary paradise. It’s the grand Mecca of inspiration for an aspiring chef like myself, which is why I’m super excited to add this cookbook to my collection.” –Jessie Tyler Ferguson

“Los Angeles is a true melting pot, and its authentic ethnic food scene is understandably fantastic. The Grand Central Market has it all: Middle Eastern, Thai, Mexican, Japanese, BBQ, you name it. It's delicious one stop shopping. Literally. You can get your groceries there, too.” –Neil Patrick Harris and David Burtka

“Whenever I go back to LA, Grand Central Market is my first stop on the way home from the airport. I’m so excited to be able to make these dishes in my New York City apartment now—and to skip the line for Ramen Hood’s slurp-worthy vegan bowls!” –Chloe Coscarelli

“Some of the best and most exciting food in LA happens at Grand Central Market, and I should know because I roam it frequently (the Market, not the city). I shall cherish this collection of excellent recipes and carry them with me whenever I’m not on the West Coast.” –Chris Stang

"Visiting Grand Central Market is the most important part of our family’s weekend routine. With this book, I’m so excited to bring our favorite recipes from our favorite stands into my own kitchen to extend our weekend into the week!” –Busy Phillips

“The downtown market represents the city’s ever-evolving food scene. And now there’s a book documenting it all.” –TASTE

“The Grand Central Market Cookbook celebrates the Downtown Los Angeles market … so you can cook up nostalgia after a visit.” –USA Today

“A stunning tribute to the glorious tacos, carnitas, ramen, fried rice, oysters and waffles that make this time-honored spot such a beehive of diversity and deliciousness.” -Atlanta Journal Constitution

ADELE YELLIN is president of the Yellin Company, a Los Angeles real estate management and development firm that own and operates Grand Central Market. Adele has two children with her late husband, Ira Yellin, and two grandchildren.

KEVIN WEST served as a creative director during Grand Central Market’s revitalization from 2012-2016. His previous books include Saving the Season: A Cook’s Guide to Home Canning, Pickling and Preserving and Truffle Boy with Ian Purkayastha.