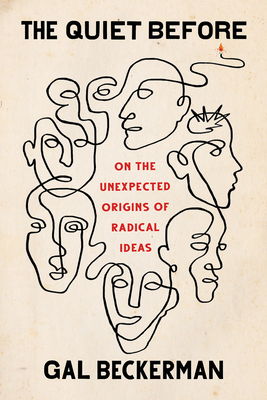 On the Unexpected Origins of Radical Ideas

“A bravura work of scholarship and reporting, featuring amazing individuals and dramatic events from seventeenth-century France to Rome, Moscow, Cairo, and contemporary Minneapolis.”—Louis Menand, author of The Free World

We tend to think of revolutions as loud: frustrations and demands shouted in the streets. But the ideas fueling them have traditionally been conceived in much quieter spaces, in the small, secluded corners where a vanguard can whisper among themselves, imagine alternate realities, and deliberate about how to achieve their goals. This extraordinary book is a search for those spaces, over centuries and across continents, and a warning that—in a world dominated by social media—they might soon go extinct.

Gal Beckerman, an editor at The New York Times Book Review, takes us back to the seventeenth century, to the correspondence that jump-started the scientific revolution, and then forward through time to examine engines of social change: the petitions that secured the right to vote in 1830s Britain, the zines that gave voice to women’s rage in the early 1990s, and even the messaging apps used by epidemiologists fighting the pandemic in the shadow of an inept administration. In each case, Beckerman shows that our most defining social movements—from decolonization to feminism—were formed in quiet, closed networks that allowed a small group to incubate their ideas before broadcasting them widely.

But Facebook and Twitter are replacing these productive, private spaces, to the detriment of activists around the world. Why did the Arab Spring fall apart? Why did Occupy Wall Street never gain traction? Has Black Lives Matter lived up to its full potential? Beckerman reveals what this new social media ecosystem lacks—everything from patience to focus—and offers a recipe for growing radical ideas again.

Lyrical and profound, The Quiet Before looks to the past to help us imagine a different future.

Praise For The Quiet Before: On the Unexpected Origins of Radical Ideas…

“Beckerman’s wide range is impressive and makes The Quiet Before the most original book I’ve read in a long time.”—The New York Review of Books

“Excellent . . . Among the joys of The Quiet Before is how it reframes the seeming flotsam of everyday communication as tacitly subversive.”—Chicago Tribune

“The Quiet Before is a quirky, delightful mix of a book . . . Beckerman’s historically expansive case studies and engaging storytelling make The Quiet Before distinct and worthwhile.”—Washington Post

“[R]ather than write yet another cyber-pessimist jeremiad, Beckerman gives us a series of richly detailed historical narratives, deeply researched and reported . . . to help us step back and think about where the next radical ideas will come from, the ones we’ll need if we’re going to get through a catastrophic century.”—Los Angeles Review of Books

“Cinematic . . . Wide-ranging, subtly ambitious . . . [Beckerman] leads us on a magical history tour—Aix-en-Provence in 1635, Moscow in 1968, Sausalito in 1985—showing but not telling, patiently piling up details.”—Andrew Marantz, The New Yorker

“[The Quiet Before] at first seems like a Big Idea book, threading together obscure parcels of history into a grand theory of today. But what distinguishes Beckerman’s latest . . . is that it has heart and purpose.”—Salon

“[The Quiet Before] can help readers to imagine—and join—a better kind of conversation in the kitchen of ideas.”—Financial Times

“The moment for this book is now as we navigate this new era of virtual interactions and wonder how we got here and where we’re headed.”—Susan Orlean, author of On Animals

“Rarely does a book give you a new way of looking at social change. This one does.”—Walter Isaacson, author of The Code Breaker

“[A] penetrating feat of the intellect . . . This book should be read by anyone interested in thinking.”—Andrew Solomon, author of Far from the Tree

“The Quiet Before is a splendid and singular history—great storytelling, elegant prose, spanning centuries but extremely timely, connecting dots in fresh and illuminating ways.”—Kurt Andersen, author of Evil Geniuses

“What a beautiful and humane book.”—Thomas Chatterton Williams, author of Self-Portrait in Black and White

“The Quiet Before is that rare book: arresting in its premise, supported by historical examples, and relevant to right now.”—Sherry Turkle, author of The Empathy Diaries

Gal Beckerman is the senior editor for books at The Atlantic. Formerly an editor at The New York Times Book Review, he is the author of the widely acclaimed When They Come for Us, We’ll Be Gone, which won the National Jewish Book Award and the Sami Rohr Prize and was named a best book of the year by The New Yorker and The Washington Post. He has a PhD in media studies from Columbia University and writes for many publications, including The New Republic and The Wall Street Journal. He lives in Brooklyn with his wife and their two daughters.
Loading...
or support indie stores by buying on