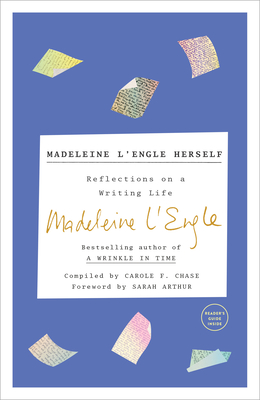 Reflections on a Writing Life

The author of over fifty books, including Newbery Award winner A Wrinkle in Time, Madeleine L'Engle is internationally acclaimed for her literary skills and her ability to translate intangible things of the spirit-- both human and divine--into tangible concepts through story. In Madeleine L'Engle Herself: Reflections on a Writing Life, you'll find hundreds of this celebrated author's most insightful, illuminating, and transforming statements about writing, creativity, and truth.

After splitting her time between New York City and Connecticut and acting as the librarian and writer-in-residence at the Cathedral of St. John the Divine, Madeleine L’Engle died on September 7, 2007 at the age of 88.

Praise For Madeleine L'Engle Herself: Reflections on a Writing Life…

"Madeleine L'Engle is one of the wise women not only of our time but of the ages. She would be comfortable in the company of Sappho and Sophocles, Dante and Chaucer, MacDonald and Dostoevsky, and they would rejoice in hers. She understands, as they did, that, confronted by the mysteries at the heart of the cosmos--the mysteries of union and separation, of progress and retreat, of good and evil--one must enlist in the struggle with all one's might and at the same time bow in awe before the unspeakable beauty and pain and all that is inexplicable."
--Thomas Cahill, author of How the Irish Saved Civilization, The Gifts of the Jews, and Desire of the Everlasting Hills

"Although it would be impossible to distill into one volume all of Madeleine L'Engle's wisdom about writing, this book comes close to doing just that. The selections address the whole writing life and capture those memorable expressions that are truly Madeleine. An inspiring and helpful resource--suitable for any writer at any stage of development."
--Vinita Hampton Wright, author of Grace at Bender Springs
and Velma Still Cooks in Leeway

"This is a work that could only have come from Madeleine L'Engle. She is one of the few writers who has married the life of faith and the life of art together so beautifully. There are not many literary heroes among us, and if ever there was one, it is her. Within L'Engle's reflections on the mystery and the craft of writing there is more than enough wisdom to help those of us who read it to become far better writers than we might have been otherwise. Sometimes when you read a great writer when they write about the art of craft itself, you want to retire immediately and become a plumber. This book made me want to pick up my pen and go back to work, and to work harder than I ever have before. That is no small gift."
--Robert Benson, author of Between the Dreaming and the Coming True
and Living Prayer
or support indie stores by buying on
Copyright © 2020 American Booksellers Association