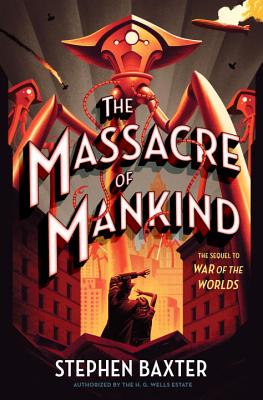 The Massacre of Mankind (Hardcover)

Sequel to The War of the Worlds

A sequel to the H.G. Wells classic THE WAR OF THE WORLDS, brilliantly realized by award-winning SF author and Wells expert Stephen Baxter

It has been fourteen years since the Martian invasion. Humanity has moved on, always watching the skies but confident that we know how to defeat the alien menace. The Martians are vulnerable to Earth germs. The army is prepared. Our technology has taken great leaps forward, thanks to machinery looted from abandoned war-machines and capsules.

So when the signs of launches on Mars are seen, there seems little reason to worry. Unless you listen to one man, Walter Jenkins, the narrator of Wells’ book. He is sure that the first incursion was merely a scouting mission, a precursor to the true attack—and that the Martians have learned from their defeat, adapted their methods, and now pose a greater threat than ever before.

Thrust into the chaos of a new worldwide invasion, journalist Julie Elphinstone—sister in law to Walter Jenkins—struggles to survive the war, report on it, and plan a desperate effort that will be humanity’s last chance at survival. Because the massacre of mankind has begun.

Echoing the style and form of the original while extrapolating from its events in ingenious, unexpected fashion again and again, The Massacre of Mankind is a labor of love from one of the genre’s most praised talents—at once a truly fitting tribute to a classic and brainy, page-turning fun for any science-fiction fan.

STEPHEN BAXTER is one of the UK's most acclaimed writers of science fiction. His many books include the Long Earth novels (written with Terry Pratchett), the Time's Odyssey novels (written with Arthur C. Clarke), the epic, far-future novels Proxima and Ultima, and Time Ships, a sequel to H. G. Wells's The Time Machine. His work has received the Locus Award, the Philip K Dick Award, The British Science Fiction Award, and the John W. Campbell Award, and has been nominated numerous times for the Clarke and Hugo Awards. He lives in Northumberland.

Praise For The Massacre of Mankind: Sequel to The War of the Worlds…

“Alien invasion juiced up by alternate history, with real people as well...from sci-fi’s Valhalla, the shade of Wells must be applauding. Perhaps with a touch of envy.”--Wall Street Journal

"A highly enjoyable work of homage and extrapolation. Baxter’s chapters are short, sharp shocks, and he cleverly reuses many of Wells’s original characters...[and] regularly offers intertextual winks to readers who know their Wells."--The Washington Post

“Tightly gripping storytelling [that] reads like a genuine labour of love. I can’t think of another living writer more deserving of the “official heir of Wells” tag than Baxter.” – The Guardian

“The style and tone are spot on…cleverly extrapolates Wells’s themes and incorporates scientific theories of the day.”—Financial Times

"An ingenious work by a perceptive admirer...never less than highly diverting."--Times Literary Supplement

“A superb sequel…turns the terrific tale Wells told in his time into the foundation of something greater. [A] fitting and filling follow-up to one of science fiction’s great standard-bearers.”– Tor.com

“Very much a tribute to HG Wells…a wholly unexpected treat of a sequel.”—SF Crowsnest

“Surprisingly thoughtful…[a] page-turning novel that pays homage to the original story but then enhances it.” – SFFWorld
or
Not Currently Available for Direct Purchase
Copyright © 2020 American Booksellers Association