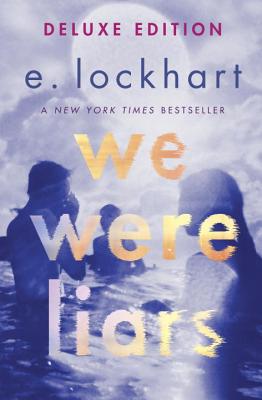 We Were Liars Deluxe Edition (Hardcover)

The New York Times bestseller We Were Liars is now available as a not-to-be-missed hardcover deluxe edition! Whether you know how it ends (shh . . . don’t tell!) or have let too many seasons go by without discovering the truth about the Liars for yourself, you will want to get your hands on the exclusive new content in this deluxe edition.

And act fast: the first printing is signed by the author!

A beautiful and distinguished family.
A private island.
A brilliant, damaged girl; a passionate, political boy.
A group of four friends—the Liars—whose friendship turns destructive.
A revolution. An accident. A secret.
Lies upon lies.
True love.
The truth.

We Were Liars is a modern, sophisticated suspense novel from National Book Award finalist and Printz Award honoree E. Lockhart. In addition to the bestselling novel, the collector’s edition includes:

·  Never-before-shared letters from Gat to Cadence
·  A fascinating behind-the-scenes look at the author’s creative process
·  The author’s hand-drawn map of Beechwood Island and the Sinclair family tree
·  Unique ideas for book discussions—Sinclair family–style
·  An excerpt from E. Lockhart’s upcoming novel Genuine Fraud—a psychological thriller that will leave you breathless

Read it.
And if anyone asks you how it ends, just LIE.


Praise for We Were Liars:

“Haunting, sophisticated . . . a novel so twisty and well-told that it will appeal to older readers as well as to adolescents.” —The Wall Street Journal

“A rich, stunning summer mystery with a sharp twist that will leave you dying to talk about the book with a pal or ten.” —Parade.com

“Thrilling, beautiful, and blisteringly smart, We Were Liars is utterly unforgettable.” —John Green, #1 New York Times bestselling author of The Fault in Our Stars

“You’re going to want to remember the title. Liars details the summers of a girl who harbors a dark secret, and delivers a satisfying, but shocking twist ending.” —Entertainment Weekly

“An ambitious novel with an engaging voice, a clever plot and some terrific writing.” —The New York Times Book Review

“No one should be talking about the shocking twist ending. What we can talk about is . . . [Lockhart’s] razor-sharp portrayal of a family for whom keeping up appearances is paramount and, ultimately, tragic.” —Chicago Tribune

E. Lockhart wrote the New York Times bestseller We Were Liars and the upcoming Genuine Fraud, a psychological thriller. Her other books include Fly on the Wall, Dramarama, The Disreputable History of Frankie Landau-Banks, and the Ruby Oliver Quartet, which includes The Boyfriend List, The Boy Book, The Treasure Map of Boys, and Real Live Boyfriends. Visit her online at emilylockhart.com, and follow her on Twitter at @elockhart.


Praise For We Were Liars Deluxe Edition…

"You’re going to want to remember the title. Liars details the summers of a girl who harbors a dark secret, and delivers a satisfying, but shocking twist ending." —Breia Brissey, Entertainment Weekly

"Thrilling, beautiful, and blisteringly smart, We Were Liars is utterly unforgettable." — John Green, #1 New York Times bestselling author of The Fault in Our Stars

"This mindblowing YA thriller from E. Lockhart will make you glad you're the 99 percent...And that's about all we can tell you when it comes to the story of 'We Were Liars,' the book by E. Lockhart that everyone will be reading, and re-reading, this summer. It's twisty, it's mysterious, and it's got a surprise ending that'll knock your socks off."
—Kat Rosenfield, MTV News

"Surprising, thrilling, and beautifully executed in spare, precise, and lyrical prose, Lockhart spins a tragic family drama, the roots of which go back generations. And the ending? Shhhh. Not telling. (But it’s a doozy)...This is poised to be big." —Booklist, starred review

"Lockhart has created a mystery with an ending most readers won’t see coming, one so horrific it will prompt some to return immediately to page one to figure out how they missed it. At the center of it is a girl who learns the hardest way of all what family means, and what it means to lose the one that really mattered to you." —Publishers Weekly, starred review

"The ending is a stunner that  will haunt readers for a long time to come." —School Library Journal, starred review

"A taut psychological mystery marked by an air of uneasy disorientation...The ultimate reveal is shocking both for its tragedy and for the how-could-I-have-not-suspected-that? feeling it leaves us with. But we didn’t, which is Lockhart’s commendable triumph." —The Horn Book, starred review

“This is a love story as much as it is a psychological mystery…Astonishing." —Shelf Awareness, starred review

“[a] haunting, sophisticated mystery...a novel so twisty and well-told that it will appeal to older readers as well as to adolescents.” —The Wall Street Journal

“Irresistible premise for this ticking time bomb of a novel.” —The New York Times Book Review

"A Lockhart YA is always a treat and this is no exception...The glimpse we get into a life of privilege, a lifestyle most of us can only imagine, is insightful and thrilling. The ending will shock the mose jaded of readers, we promise!" —RT Book Reviews

"There's trouble in paradise at the opening of National Book Award finalist and Printz honoree E. Lockhart's shattering yet ultimately hopeful YA novel . . . and neither family nor reader will ever be the same." —Library Journal

"It's a nearly perfect story, and it's utterly absorbing." —Bustle.com, 2014's Best YA Books

"No book on this summer's reading list will have readers immobilized in their hammocks more than E. Lockhart's We Were Liars..... This book has that surprise quality--like Elizabeth Wein's Code Name Verity--that makes readers scramble back through hungrily devoured chapters and wonder in admiration: Could I have seen this coming? Did I miss any clues?" —Newsday

"Like a shard of glass, WE WERE LIARS glitters and shines, then cuts deep. E. Lockhart has truly outdone herself with this masterful, darkly mesmerizing portrait of a fractured family ruined by the excess of wealth. Humming with rich descriptions and razor-sharp intelligence, the story of Cadence Sinclair Eastman will both inspire and haunt readers for years to come." —Sarah Pitre, Forever Young Adult

"Perception often is not reality -- and it certainly is not in WE WERE LIARS. This is a look at what “a perfect world” looks like on the inside and how it unravels once one of the players sees it for what it is. Pitch perfect in both plotting and character development."
—Carol Fitzgerald, Book Reporter

"The must-read contemporary novel so far this year is definitely E. Lockhart’s stellar We Were Liars, a rich, stunning summer mystery with a sharp twist that will leaving you dying to talk about the book with a pal or ten." —Sonia Charaipotra, Parade

"A haunting tale about how families live within their own mythologies. Sad, wonderful, and real." —Scott Westerfeld, author of Uglies and Leviathan

"I've fallen in love with every E. Lockhart book I've ever read (and I've read them all), but We Were Liars blows them all out of the water. Dark, gripping, heartrending, and terrifyingly smart, this book grabs you from the first page--and will never let go." — Robin Wasserman, author of The Waking Dark

"Spectacular." —Lauren Myracle, author of Shine, The Infinite Moment of Us, and TTYL

"A haunting, brilliant, beautiful book. This is E. Lockhart at her mind-blowing best." — Sarah Mlynowski, author of Don't Even Think About It and Gimme a Call

"This is a brilliant new novel by E. Lockhart. I've always adored a good generational drama and this is deeply fascinating reading and soaked in suspense. And the ending is utterly spooky." —Martin Short, including WE WERE LIARS in his top 3 books of 2014

“We Were Liars by E. Lockhart is a book as tragic as it is interesting.” —USAToday.com, Must-Read Romances

"The mystery driving the plot is a shocking punch in the face that will stay with you long after you finish." —Hypable.com. Hypable-Weekend Reading

“There’s no preparing for the shocker of an ending.”
—SLJ.com

“This month marks the publication of another fine YA novel destined to extend beyond the teen set. ‘We Were Liars,’ by E. Lockhart is quite simply amazing.” —The Missourian

"This book has everything I want from a summer read: a gorgeous setting that I can imagine I'm vacationing in; flawed, unreliable, sometimes infuriating characters; and a twity-turny psychological mystery that is impossible to put down." —RookieMag.com

"We Were Liars is amazing. I felt run over by it . . . .Emily has done something incredible here. —Paul O. Zelinsky


“Goose bump-inducing.” —BuzzFeed.com, YA Novels to Watch Out for Spring 2014

2. In what ways does her father’s abandonment of their family impact Cadence? What can be inferred about his choice to no longer live as part of the Sinclair family?

3. Consider Cadence’s narration. Though she freely admits she remembers little and is on a number of medications, do you believe her version of the story?

4. What role does Cadence’s grandfather play in the story? How does his role as patriarch of the family define the choices made by his children and grandchildren? To what extent is he to blame for the shortcomings of others?

5. When describing her aunt’s divorce, Cadence states, “I don’t know what happened. The family never speaks of it.” In what ways does the family’s curtain of politeness paralyze them?

6. When Cady falls in love with Gat, their relationship and his role as an outsider to the family threatens to overturn the social order. In your opinion, what is the real danger of their relationship? To whom?

7. Discuss the significance of the title, We Were Liars. In what ways does it accurately describe the events and relationships portrayed in the novel?

8. How does the author’s use of Shakespeare’s King Lear and Brontë’s Wuthering Heights influence the story?

10. Consider the moral questions raised by this novel. How are racism, land ownership, inheritance, materialism, greed, and manipulation handled by Lockhart? In your opinion, in what ways do these elements enrich the story?

11. Do you believe the Liars were justified in any way to commit the crime they committed? Was the crime successful in any way?

12. Was the ending a surprise, or did you see it coming? Return to earlier passages in the book and locate instances of Lockhart’s use of foreshadowing of events to come.

13. What do you feel Cadence comes to learn at the end of the novel? In your opinion, what insights are gained?

14. What five words would you use to describe We Were Liars?