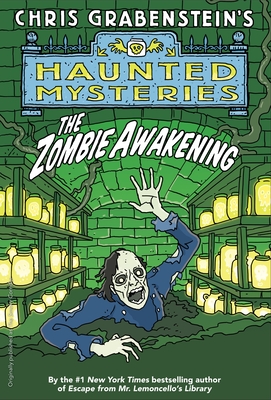 The Zombie Awakening (A Haunted Mystery #3)

Previously published as The Smoky Corridor. From the New York Times bestselling author of Escape From Mr. Lemoncello's Library and coauthor of I Funny and Treasure Hunters, comes a series of spine-tingling mysteries to keep you up long after the lights go out.

Where there’s smoke, there’s fire.
It just doesn’t usually come from the grave.

The basement of Zack’s new school is hiding something, or rather someones. Two ghosts, to be exact—Joseph and Seth Donnelly, brothers who perished in a suspicious fire.

But the ghosts are the least of Zack's problems. It’s what they warn Zack about that has him truly frightened: there’s an evil zombie lurking beneath the school.

Fortunately, Zack has some new friends, Malik and Azalea, who can help in his paranormal adventures. Together they’ll attempt to dodge the zombie, a treasure-seeking hit man, a voodoo-savvy ghost just waiting fora new body, and more. But will they survive until recess or end up on the lunch menu?

Read all of Chris Grabenstein's Haunted Mysteries!
The Crossroads
The Demons' Door
The Zombie Awakening
The Black Heart Crypt

CHRIS GRABENSTEIN is the Agatha and Anthony award-winning author of The Crossroads and The Hanging Hill as well as several adult thrillers. He used to write TV and radio commercials and has written for The Muppets. Chris was born in Buffalo, New York, and moved to Chattanooga, Tennessee, when he was 10. After college, he moved to New York City to become an actor and writer. Currently, Chris and his wife JJ live in New York City with two cats and a dog who starred on Broadway.
Loading...
or
Not Currently Available for Direct Purchase