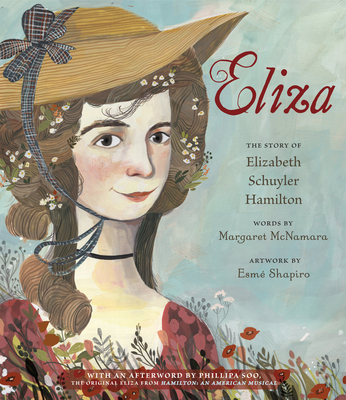 The Story of Elizabeth Schuyler Hamilton: With an Afterword by Phillipa Soo, the Original Eliza from Hamilton: An American

Fans of the musical Hamilton and their children won't want to miss this stunning picture book biography about Eliza Hamilton, American Founding Father Alexander Hamilton's extraordinary wife and an important figure in her own right. Includes an afterword from Phillipa Soo, the actress who originated the role of Eliza in Hamilton!

We all know the story of scrappy Alexander Hamilton and his rise in American politics--but how much do we know about his workmate, inspiration, and stabilizing force, Elizabeth Schuyler Hamilton?

Margaret McNamara employs the letter-writing style of the period to tell the story of Eliza Hamilton, who was born into a family of considerable wealth, power, and influence in Albany, New York, in 1757. Eliza was expected to marry into a similarly powerful family . . . until she met and fell in love with the charismatic Hamilton. She stood by him throughout his tumultuous life, and after his death, she single-handedly collected his papers and preserved them for historians and musical-theater writers of the future. Eliza outlived Hamilton by fifty years; during that time she founded the first orphanage in New York State, raised funds for the Washington Monument, and kept the flame of her husband's memory and achievements alive.

This is a beautiful and informative biography featuring extensive back matter--including information about America's revolution, the historical relevance of letter writing, and a timeline--and exquisite, thoroughly researched art that mirrors paintings from 18th-century America. Every Hamilton lover will want to gift it to the young readers in their lives.

Praise For Eliza: The Story of Elizabeth Schuyler Hamilton: With an Afterword by Phillipa Soo, the Original Eliza from Hamilton: An American…

"A lovely biography of a revolutionary in her own right."—Booklist, starred review

MARGARET McNAMARA is the award-winning author of four picture books about Mr. Tiffin's class: How Many Seeds in a Pumpkin?; The Apple Orchard Riddle; Poem in your Pocket; and most recently, The Dinosaur Expert. She was married at St. Michael's Church in New York, where Eliza Hamilton was once a parishioner. Ms. McNamara lives in New York City .Visit her on the Web at margaretmcnamara.net or follow her on Twitter at @bbowen949.

ESME SHAPIRO is an award-winning illustrator of books for children. She wrote and illustrated her debut book, Ooko, and illustrated Yak and Dove by Kyo Maclear. A graduate of the Rhode Island School of Design, she has exhibited at the Society of Illustrators, and her work has been featured in Taproot and Plansponsor magazines.
Loading...
or
Not Currently Available for Direct Purchase