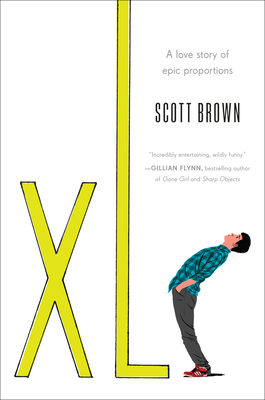 “Growing up is tough, no matter what! But it doesn’t make it any easier if you are a boy and barely five feet tall going into high school. You just want to be normal, average, and have a friend or two. Will Daughty has a stepbrother, who is also his best friend, and Monica, a girl he secretly loves. But Will is not average. He doesn’t feel normal. Until he starts to grow. And grow. And grow. And soon Will is towering over everyone. And here begins another set of problems. XL is a fun and fascinating story about growing up — literally.”
— Marilyn Robbins, BookBar, Denver, CO
View the List

Fiercely funny, honest, and poignant, this story of a growth spurt gone wrong is perfect for readers who love Becky Albertalli and Jesse Andrews.

WIll Daughtry is a late bloomer--at least, that's what everyone tells him. On his sixteenth birthday, Will is just shy of five feet, and he is bitterly resigned to being tiny forever. His only comforts are his best friend and stepbrother, Drew (6'3"), and their pal Monica (5'10"), the girl Will's been quietly pining for since fifth grade. Everyone else literally overlooks him. But with them, he feels whole. That is, until things take an unexpected turn, and he realizes he's really and truly on his own.

That's when he starts to grow. And grow fast. Astonishingly fast. For the first time, Will's happy with his stature, and the world's at his feet (for a change). People see him differently; more important, he sees himself differently. But the highest heights come with some low, low lows, and his most precious relationships suffer excruciating growing pains. Will has to figure out what to do with himself--and all of this new "himself" he never expected to have.

"A delightful romp with heart."--Booklist

"Brown gives readers so much to connect to and relate. Characters are sincere, especially in their introspective frustrations about feeling small (physically and metaphorically)."--SLJ

“A witty, remarkable tale of friendship, acceptance, and, yes, growth that will charm adults as well as younger readers. Outsized in heart and humanity, XL is a YA novel that’s destined to become a classic.” —GILLIAN FLYNN, bestselling author of Gone Girl and Sharp Objects

“This book is a twirling, swirling attack on insecurity that reminded me how hard it is to grow up. This book is so good, I want to punch Scott Brown in the face, which I know is extra horrible, since I am much taller.” —JOEL STEIN, humanitarian and author of Man Made: A Stupid Quest for Masculinity

“It’s a cliché to say I couldn’t put this book down, but it’s also the truth. With a heart as big as its protagonist, and a voice as hilarious as it is poignant, XL is an exceptional YA debut.” —JENNIFER E. SMITH, bestselling author of The Statistical Probability of Love at First Sight and Field Notes on Love

“XL is going to be huge! It’s about the giant risks we take for our first love, the ways in which growing up sometimes feels like it happens to us, instead of by us, and how we all must learn to understand our own strength. I loved Will Daughtry at every height. You will too.” —JULIE BUXBAUM, New York Times bestselling author of Tell Me Three Things and Hope and Other Punchlines

Scott Brown grew up in Durham, North Carolina, and began his career in journalism writing for Entertainment Weekly, Wired, GQ, and Time, among others. He was chief drama critic for New York Magazine from 2010 to 2014, and received the 2013-2013 George Jean Nathan Award for Dramatic Criticism. Lately, he's written a lot of TV: HBO's Sharp Objects, based on the novel by Gillian Flynn; WGN's critically acclaimed Manhattan, and the Stephen-King-derived suspenser Castle Rock for Hulu, for which he received a 2018 Writers Guild Award.

Scott also co-wrote the book for Beetlejuice the Musical (with Emmy-nominated writer-producer Anthony King) for Warner Bros. Theatricals. Also with King, he co-wrote and co-composed the off-Broadway musical comedy Gutenberg! The Musical! Off the clock, Scott likes to play piano, hang out with his kids, and scream back at the car radio. He lives in Massachusetts. Learn more about Scott on Twitter at @scottabridged.