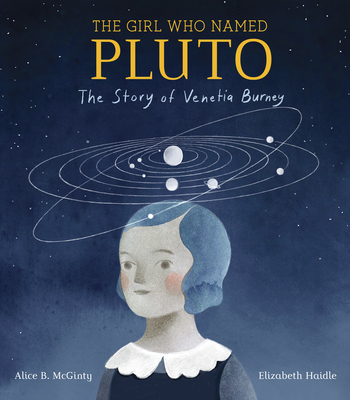 The Girl Who Named Pluto

The Story of Venetia Burney

An empowering, inspiring--and accessible!--nonfiction picture book about the eleven-year-old girl who actually named the newly discovered Pluto in 1930.

When Venetia Burney's grandfather reads aloud from the newspaper about a new discovery--a "ninth major planet" that has yet to be named--her eleven-year-old mind starts whirring. She is studying the planets in school and loves Roman mythology. "It might be called Pluto," she says, thinking of the dark underworld. Grandfather loves the idea and contacts his friend at London's Royal Astronomical Society, who writes to scientists at the Lowell Observatory in Massachusetts, where Pluto was discovered. After a vote, the scientists agree unanimously: Pluto is the perfect name for the dark, cold planet.
Here is a picture book perfect for STEM units and for all children--particularly girls--who have ever dreamed of becoming a scientist.

Praise For The Girl Who Named Pluto: The Story of Venetia Burney…

ALICE McGINTY is the award-winning author of over forty books for children, including Darwin, an Orbis Pictus Honor Book and one of Booklist's Top 10 Biographies for Youth. It received three starred reviews and was called "exquisite and enlightening" by Kirkus Reviews. Her most recent picture book, Rabbi Benjamin's Buttons, was named a Sydney Taylor Notable Book. She also runs a writing camp for kids, Words on Fire. Visit her on the web at alicebmcginty.com or follow her on Twitter @AliceBMcGinty.

ELIZABETH HAIDLE is the creative director of and a regular contributor to Illustoria magazine, as well as a collaborator at Mascot Press, an independent comics press. She has illustrated a graphic novel, I, Parrot, written by Deb Olin Unferth, she has several nonfiction comics series in the works. Ms. Haidle received her MA in illustration from Savannah College of Art and Design. You can follow her on Instagram at @ehaidle.
Loading...
or
Not Currently Available for Direct Purchase