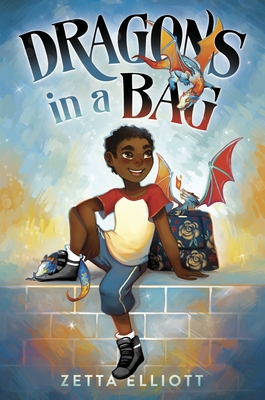 Dragons in a Bag

The dragon's out of the bag in this diverse, young urban fantasy from an award-winning author!

When Jaxon is sent to spend the day with a mean old lady his mother calls Ma, he finds out she's not his grandmother--but she is a witch! She needs his help delivering baby dragons to a magical world where they'll be safe. There are two rules when it comes to the dragons: don't let them out of the bag, and don't feed them anything sweet. Before he knows it, Jax and his friends Vikram and Kavita have broken both rules! Will Jax get the baby dragons delivered safe and sound? Or will they be lost in Brooklyn forever?

The Dragons in a Bag series continues! Don't miss The Dragon Thief, and coming in Spring 2022, The Witch's Apprentice.

Praise For Dragons in a Bag…

"What a breath of fresh air: a chapter-book fantasy with an urban setting, an array of brown-skinned magic wielders, and a lovable black protagonist readers will root for and sympathize with... Good, solid fantasy fun."—Kirkus Reviews, starred review

"Elliott skillfully introduces themes about creating positive change, examines issues of othering and the fear of differences, and touches upon the complexities of family, gentrification, and segregation. A promising start to a new series..."—School Library Journal, starred review

Zetta Elliott was born in Canada and moved to the United States in 1994. Her poetry has been published in several anthologies, and her plays have been staged in New York and Chicago. Her essays have appeared in the Huffington Post, School Library Journal, and Publishers Weekly. She is the author of over twenty-five books for young readers, including the award-winning picture books Bird and Melena's Jubilee. She is also a contibutor to We Rise, We Resist, We Raise Our Voices, published by Crown Books for Young Readers. Elliott is an advocate for greater diversity and equity in publishing. A longtime resident of Brooklyn, she currently lives in Illinois. Learn more at zettaelliott.com.
Loading...
or support indie stores by buying on