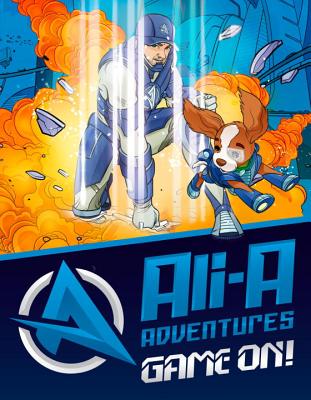 Game On! The Graphic Novel

The most popular gamer on YouTube, Ali-A, presents his very own action-packed graphic novel!

It’s launch time for the hotly anticipated video game Alien Liberator 2, and who better to invite along than top gamer Ali-A? Ali is promised the biggest game launch ever—but what he doesn’t count on is just how real the action is about to get!

When a merciless band of aliens turns up to spoil the party, it’s up to Ali to transform from gaming icon to real-life hero. Can he defeat the end-of-game boss and save the day? With a little help from his fans and his very special dog, Eevee, he’s going to give it his best shot!

With 3 billion YouTube views and 13 million subscribers across his two channels, Ali-A is one of the most popular faces in gaming.  Ali-A holds two Guinness World Records for his Call of Duty content, and is also known for his Pokémon GO videos. In 2017, Ali debuts his brand-new CBBC series, Ali-A’s Superchargers. You can find him on his YouTube channels Ali-A and MoreAliA, and on Twitter at @OMGitsAliA.
or
Not Currently Available for Direct Purchase
Copyright © 2020 American Booksellers Association