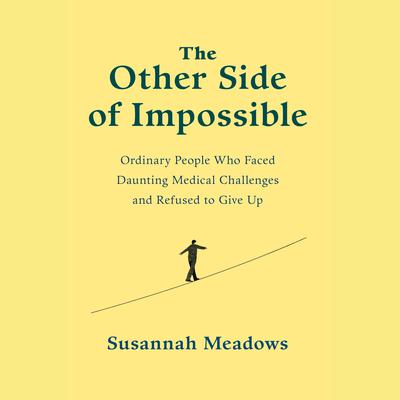 The Other Side of Impossible (Digital Audiobook)

You’re faced with a difficult health condition. You have exhausted medicine’s answers. What do you do? Susannah Meadows tells the real-life stories of seven families who persisted when traditional medicine alone wasn’t enough.

Their adventures take us to the outer frontiers of medical science and cutting-edge complementary therapies, as Meadows explores research into the mind’s potential to heal the body, the possible role food may play in reversing disease, the power of agency, perseverance, and hope—and more.

When journalist Susannah Meadows noticed her three-year-old son, Shepherd, shying away from soccer practice, she had no idea it was the first sign of juvenile idiopathic arthritis. The diagnosis was the first step of a long journey, physically painful for Shepherd and emotionally wrenching for Susannah and her family. But they pressed on, and using a combination of traditional and complementary medicine they beat the disease, and the odds.

Meadows chronicles her own story, and takes you into the lives of other remarkable people, exploring their heartbreaks and triumphs. One boy who has severe food allergies undergoes an unconventional therapy and is soon eating everything. An organic farmer in Washington State tries to solve the puzzle of her daughter’s epileptic seizures. A physician with MS creates her own combination of treatments and goes from a wheelchair to riding a bike again. A child diagnosed with ADHD refuses to take medication and instead improves his life, and the life of his family, after changing his diet. Other families take on rheumatoid arthritis and autistic behaviors.

Meadows includes new information about traditional and nontraditional medicine and the latest science on how the health of our gut bacteria is connected to wellness—and how the right foods play a key role in helping this microscopic population thrive. She also talks with scientists who study the traits and circumstances that may make some people keep going when others feel helpless. These researchers are illuminating the psychology of healing—how the mind, and asserting control over your body and health, can play a part in recovery.

Fascinating, moving, and profoundly inspiring, The Other Side of Impossible gives us people driven by love, desperation, and astonishing resolve—a community of the defiant who share an extraordinary talent for hope and for fighting the battle for healing in today’s world and tomorrow’s.

Susannah Meadows is a former senior writer for Newsweek, where she worked for ten years. She wrote about Serena Williams, bull riding, the Christian Right, Hillary Clinton, Columbine, and the Duke lacrosse scandal. Assigned to John Kerry’s plane, she reported on the 2004 presidential race and later became senior politics editor for Newsweek.com. She wrote the Newly Released column for The New York Times, and has contributed book reviews since 2002. Meadows lives in Brooklyn with her husband, Darin Strauss, and their two boys.