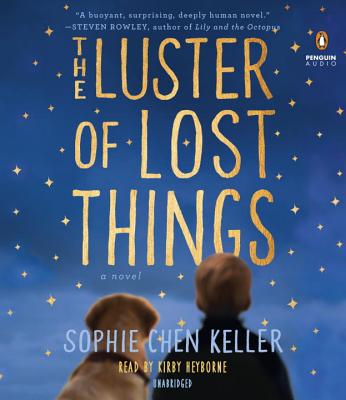 The Luster of Lost Things

Praise For The Luster of Lost Things…

“A book of rare elegance. . . . Keller understands the magic of New York City . . . and how sometimes listening to those most people hurry past make us find something we did not know we were missing. This book is one of those things: Take the time to find it.” – Newark Star-Ledger

“[R]ewards those willing to savor the linguistic riches and quirky characters, artfully provided by the author. With its strong story line and magic realism, this will appeal to readers of Joanne Harris’ Chocolat and the works of Alice Hoffman.” —Booklist

“Insightful....This is a feel-good, message-driven story about the restorative power of human connectedness and how acts of kindness can ultimately change lives.”—ShelfAwareness

“A buoyant, surprising, deeply human novel that underscores how easy it is to become lost in this great big world, and how affecting it is to be found. It's no small bit of irony that I completely lost myself in these pages. The Luster of Lost Things is every bit as delicious as the magical treats from the family bakery at the heart of this charming debut.”—Steven Rowley, author of Lily and the Octopus

"Keller's style is simple and often beautiful, and she infuses the novel with flashes of subtle humor and mouthwatering descriptions of sugary confections." —Kirkus Reviews

“The true magic of New York City shines especially bright thanks to a sprinkle of literary magic in this tender and original debut. Readers will root for the endearing young Walter along every step of his remarkable odyssey.”—Meg Donohue, USA Today bestselling author of Dog Crazy: A Novel of Love Lost and Found

“Sophie Chen Keller’s enchanting debut melts kindness and action together into a tale of wonder and magic. I savored each tasty morsel as Walter and his valiant dog, Milton, began their extraordinary quest—where the seeking became more important than the finding. Keller’s writing reminded me of Adriana Trigiani—the words are so perfectly chosen that missing even one would lessen the enjoyment.”—Amy Reichert, author of The Coincidence of Coconut Cake

"The book takes its readers on a magical odyssey through New York." —Falmouth Review

“The Luster of Lost Things is about opening your heart to others and allowing yourself to believe in the wonder and magic of life. Young hero, Walter Lavender, uses his extraordinary talents to track down what he holds dearest to himself, and his family, assisted by a myriad of compelling, curious characters, usually hidden away from the public eye. In doing so, he shows us how to be brave and open-hearted, and to never give up trying. Unique and unforgettable, this is storytelling at its finest.”—Phaedra Patrick, author of The Curious Charms of Arthur Pepper

Sophie Chen Keller was born in Beijing, China, and was raised in Ohio and California. Her fiction has won several awards and has appeared in publications such as Glimmer Train and Pedestal. After graduating from Harvard, she moved to New York City, where she currently resides with her husband and a not-so-secret cabinet of sweets.
Loading...
or
Not Currently Available for Direct Purchase