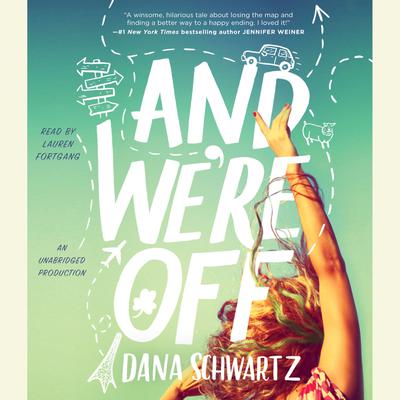 And We're Off (Digital Audiobook)

A Seventeen Magazine Best Book of the Year

“A winsome, hilarious tale about losing the map and finding a better way to a happy ending. I loved it!” —#1 New York Times bestselling author Jennifer Weiner

Seventeen-year-old Nora Holmes is an artist, a painter from the moment she could hold a brush. She inherited the skill from her grandfather, Robert, who's always nurtured Nora's talent and encouraged her to follow her passion. Still, Nora is shocked and elated when Robert offers her a gift: an all-expenses-paid summer trip to Europe to immerse herself in the craft and to study history's most famous artists. The only catch? Nora has to create an original piece of artwork at every stop and send it back to her grandfather. It's a no-brainer: Nora is in!

Unfortunately, Nora's mother, Alice, is less than thrilled about the trip. She worries about what the future holds for her young, idealistic daughter—and her opinions haven't gone unnoticed. Nora couldn't feel more unsupported by her mother, and in the weeks leading up to the trip, the women are as disconnected as they've ever been. But seconds after saying goodbye to Alice at the airport terminal, Nora hears a voice call out: "Wait! Stop! I'm coming with you!"

Dana Schwartz is a writer whose work has appeared in the New Yorker, Mental Floss, the Guardian, the New York Observer, MTV News, and VICE. When she's not on Twitter as one of her parody accounts (@GuyInYourMFA and @DystopianYA), she's on Twitter as herself (@DanaSchwartzzz), sharing far too much personal information to ever pull off the Thomas-Pynchon-reclusive-author thing. She currently lives in New York City.