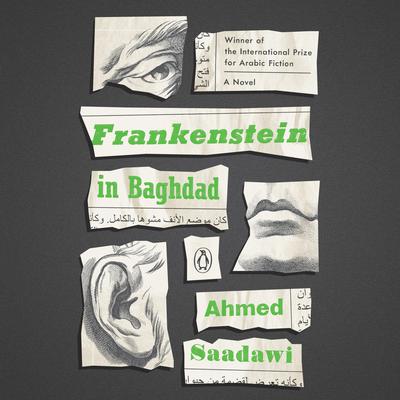 From the rubble-strewn streets of U.S.-occupied Baghdad, Hadi—a scavenger and an oddball fixture at a local café—collects human body parts and stitches them together to create a corpse. His goal, he claims, is for the government to recognize the parts as people and to give them proper burial. But when the corpse goes missing, a wave of eerie murders sweeps the city, and reports stream in of a horrendous-looking criminal who, though shot, cannot be killed. Hadi soon realizes he’s created a monster, one that needs human flesh to survive—first from the guilty, and then from anyone in its path. A prizewinning novel by “Baghdad’s new literary star” (The New York Times), Frankenstein in Baghdad captures with white-knuckle horror and black humor the surreal reality of contemporary Iraq.

Ahmed Saadawi is an Iraqi novelist, poet, screenwriter, and documentary filmmaker. He is the first Iraqi to win the International Prize for Arabic Fiction, which he won in 2014 for Frankenstein in Baghdad. In 2010 he was selected for Beirut39, as one of the 39 best Arab authors under the age of 39. He was born in 1973 in Baghdad, where he still lives.