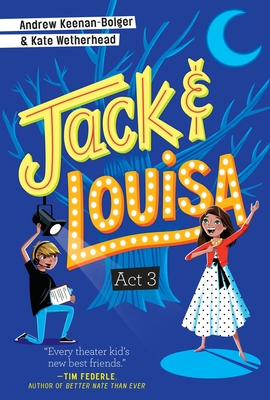 A show-stopping middle-grade series about life in and out of the spotlight from Broadway stars and Internet sensations Andrew Keenan-Bolger and Kate Wetherhead.

Two weeks at Camp Curtain-Up is just what Jack and Louisa need to fuel their passion for theater: Broadway musical sing-alongs, outdoor rehearsals, and tons of new MTNs (musical theater nerds) to meet... maybe even a special someone. It almost feels like fate when the two friends return home to find local auditions for The Sound of Music. But as Louisa fantasizes about frolicking in the Alps, Jack gets tempted by a student-run drama competition that would reunite the two with their camp friends. Will Jack get Louisa to skip an audition? Can Lou handle Jack as her director? And will someone finally get a big, Broadway happy ending?

Kate Weatherhead originated the role of Chutney in Legally Blonde: The Musical and is a fixture on the New York stage. She has performed extensively Off-Broadway and regionally, and was in the Broadway production of The 25th Annual Putnam County Spelling Bee.

"Tender, addicting, and, as always, boatloads of fun."
- Booklist