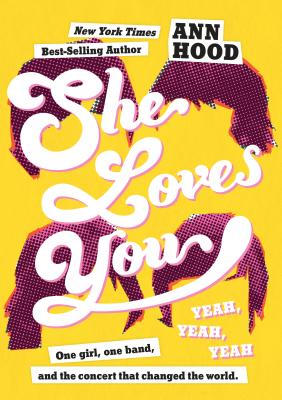 She Loves You (Yeah, Yeah, Yeah)

Ann Hood is the author of the best-selling novels The Book That Matters Most, The Obituary Writer, Somewhere Off the Coast of Maine, The Red Thread, and The Knitting Circle, as well as the memoir Comfort: A Journey Through Grief, which was a New York Times Editor's Choice and chosen as one of the top ten nonfiction books of 2008 by Entertainment Weekly. She has won two Pushcart Prizes as well as a Best American Spiritual Writing Award, two Best American Food Writing Award, and a Best American Travel Writing award. A regular contributor to the New York Times, Hood's short stories and essays have appeared in many publications, including Ploughshares, Tin House, Traveler, Bon Appetit, O, More, The Wall Street Journal, The Washington Post, The Paris Review, and others. She is the editor of the anthologies Knitting Yarns: Writers Writing About Knitting, Knitting Pearls: More Writers Writing About Knitting, and Providence Noir. Hood is also the author of books for children, including the middle-grade novel, How I Saved My Father (And Ruined Everything Else), and the ten-book Treasure Chest series for young readers. Her new memoir, Morningstar: Growing Up with Books, will be published in August. She lives in Providence, Rhode Island, and New York City, and is married to the writer Michael Ruhlman.
Loading...
or
Not Currently Available for Direct Purchase