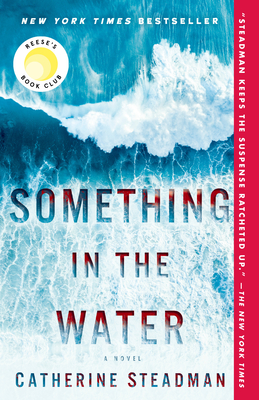 Something in the Water

A shocking discovery on a honeymoon in paradise changes the lives of a picture-perfect couple in this taut psychological thriller from the author of Mr. Nobody and The Disappearing Act.

If you could make one simple choice that would change your life forever, would you?

Erin is a documentary filmmaker on the brink of a professional breakthrough, Mark a handsome investment banker with big plans. Passionately in love, they embark on a dream honeymoon to the tropical island of Bora Bora, where they enjoy the sun, the sand, and each other. Then, while scuba diving in the crystal blue sea, they find something in the water. . . .

Could the life of your dreams be the stuff of nightmares?

Suddenly the newlyweds must make a dangerous choice: to speak out or to protect their secret. After all, if no one else knows, who would be hurt? Their decision will trigger a devastating chain of events. . . .

Have you ever wondered how long it takes to dig a grave?

Wonder no longer. Catherine Steadman’s enthralling voice shines throughout this spellbinding debut novel. With piercing insight and fascinating twists, Something in the Water challenges the reader to confront the hopes we desperately cling to, the ideals we’re tempted to abandon, and the perfect lies we tell ourselves.

Praise For Something in the Water: A Novel…

“The perfect beach read . . . Unreliable characters and a plot packed with twists will keep you guessing until the final, thrilling page.”—PopSugar

“With unreliable characters, wry voices, exquisite pacing, and a twisting plot, Steadman potently draws upon her acting chops. . . . A darkly glittering gem of a thriller from a new writer to watch.”—Kirkus Reviews (starred review)

“Captivating . . . daring . . . The threats and increasingly bad decisions accelerate with Bourne-like velocity. . . . Steadman [is] a newcomer worth watching.”—Publishers Weekly

“This debut’s opening hook, which jumps ahead in the story to reveal a shocking outcome, teamed with Erin’s spunk and the threat of Russian mobsters, creates irresistible suspense—of both the what-will-happen and the how-did-that-happen varieties.”—Booklist

“An unbearably tense debut with a knockout premise, Something in the Water had me hooked from the very first sentence. Thrilling and thought-provoking, it’s the perfect beach read. I devoured it!”—Riley Sager, New York Times bestselling author of Final Girls

“This is a book that puts you right into the shoes of the characters and has you asking: What would I do? You may find yourself increasingly uncomfortable with your answers. An unputdownable story that poses the age-old question of how well we can ever know someone else—and, perhaps even more important, how well do we know ourselves?”—Amy Engel, author of The Roanoke Girls

“We all think we know our own boundaries. We all think we’d do the right thing. But what if the opportunity for the perfect crime appeared right in front of your eyes? How many rules would you break in pursuit of the perfect life? Catherine Steadman’s debut novel, Something in the Water, is as scary as it gets. This terrifying morality tale is guaranteed to keep you up at night.”—Michelle Richmond, New York Times bestselling author of The Marriage Pact

“Pure adrenaline: I swallowed this book whole.”—Erin Kelly, author of He Said/She Said

“I absolutely loved Something in the Water, a stunning debut. . . . Superbly written, clever and gripping.”—B. A. Paris, New York Times bestselling author of Behind Closed Doors and The Breakdown

“As frightening as it is funny, Something in the Water feels like a thriller for our times, a caper with a dark heart.”—Louise Candlish, author of The Swimming Pool and Our House

“A taut and smart thriller, Something in the Water is a fast-paced examination of the slippery slope and precariousfoundations our middle-class lives are built on, and a sensitive examination of a marriage under pressure. Catherine Steadman is a genuinely unique voice in crime fiction.”—Gillian McAllister, author of Everything but the Truth and Anything You Do Say

“Brilliant.”—Catherine Isaac, author of You Me Everything

Catherine Steadman is an actress and writer based in North London, UK. She has appeared in leading roles on British television as well as on stage in the West End. In 2016 she was nominated for a Laurence Olivier Award for Best Actress in a Supporting Role for her performance in Oppenheimer. She is best known in the United States for her role as Mabel Lane Fox in Downton Abbey. She grew up in the New Forest, UK, and lives with a small dog and an average-sized man. Something in the Water is her first novel.
Loading...
or support indie stores by buying on