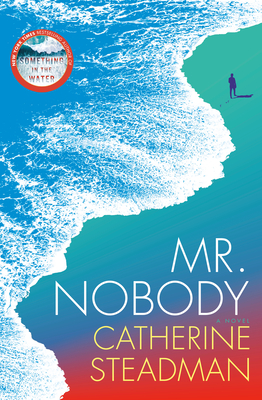 He wants to remember. She needs to forget. . . . Memento meets Sharp Objects in a gripping psychological thriller from the New York Times bestselling author of Something in the Water.

Who is Mr. Nobody?

When a man is found on a British beach, drifting in and out of consciousness, with no identification and unable to speak, interest in him is sparked immediately. From the hospital staff who find themselves inexplicably drawn to him, to international medical experts who are baffled by him, to the national press who call him Mr. Nobody, everyone wants answers. Who is this man? And what happened to him?

Some memories are best forgotten.

Neuropsychiatrist Dr. Emma Lewis is asked to assess the patient in a small town deep in the English countryside. This is her field of expertise, this is the chance she’s been waiting for, and this case could make her name known across the world. But therein lies the danger. Emma left this same town fourteen years ago and has taken great pains to cover all traces of her past since then.

But now something—or someone—is calling her back. And the more time she spends with her patient, the more alarmed she becomes that he knows the one thing about her that nobody is supposed to know.

Praise for Mr. Nobody

“Even better than Something in the Water, Catherine Steadman’s new novel, Mr. Nobody, is original, ingenious, and utterly gripping, with characters you’ll really care about as they race toward the brilliantly unexpected ending.”—JP Delaney, New York Times bestselling author of The Girl Before

Praise For Mr. Nobody: A Novel…

“Steadman once again brilliantly paces the action from the very first scene. . . . As in all good thrillers, lights unexpectedly snap out, a creepy house is hidden down a tree-woven lane, and long-buried secrets emerge. . . . A spellbinding thriller perfect for those dark and stormy nights.”—Kirkus Reviews

“Twisty . . . a highly imaginative tale tinged with Hitchcockian tension and kinetic pacing . . . Steadman’s deliciously provocative novel dishes up enough questions to fill the entire space devoted to this review. She cleverly cloaks them in more mysteries, turns and shocking revelations. Much like Something in the Water, Mr. Nobody pits fascinating characters against each other and allows them to act on their worst impulses. . . . There’s a good chance [Steadman’s] intelligently descriptive, written-for-TV-and-film writing style grew out of her experiences in front of a camera. Her literary instincts are spot on, and the protagonists she creates feel as alive as some of the characters she’s inhabited on film . . . .  This talent for inhabiting characters carries over into her writing: Mr. Nobody and Emma Lewis, though invented, seem so real. Mr. Nobody turns out to be somebody, and his unmasking makes for a delightfully compelling story.—The Washington Post

“[Mr. Nobody] somberly explores trauma and its aftermath, but ample twists and a rollicking pace make it a perfectly thrilling read.”—Vanity Fair

“The alarming questions keep piling up, even as the puzzle starts to take shape.”—Newsweek

“Once again, Catherine Steadman is adding a dash of eeriness to her mystery novel.”—PopSugar (Thriller and Mystery Books to Look Out for in 2020)

“[A] tricky psychological puzzle . . . It’s a joy to encounter a suspenseful book whose turns lurk, rather than lumber, around the corner. The story in Mr. Nobody corkscrews and somersaults. . . . Past mysteries haunt the present in ways that are both startling and claustrophobic. . . . [Steadman] is even better at writing than acting. If her first book, Something in the Water, was the Steadman gateway drug, then Mr. Nobody is the heroin that will get you hooked. Let’s hope, for purposes of withdrawal mitigation, there’s a third.”—The New York Times Book Review

“A mesmerizing psychological thriller . . . In a series of exciting twists and shocking turns, Emma and Mr. Nobody come to discover they are connected in ways neither could have imagined. Steadman’s story is wholly unique and exceedingly well executed. Suspense is peppered in all the right places, and every bread crumb dropped throughout the story returns in wildly imaginative ways.”—Associated Press

“Even better than Something in the Water, Catherine Steadman’s new novel, Mr. Nobody, is original, ingenious, and utterly gripping, with characters you’ll really care about as they race toward the brilliantly unexpected ending.”—JP Delaney, New York Times bestselling author of The Girl Before

Catherine Steadman is an actress based in North London, UK, and the author of Something in the Water. She has appeared in leading roles on British television as well as on stage in the West End. In 2016, she was nominated for a Laurence Olivier Award for Best Actress in a Supporting Role for her performance in Oppenheimer. She is best known in the United States for her role as Mabel Lane Fox in Downton Abbey. She grew up in the New Forest, UK, and lives with a small dog and an average-sized man.
Loading...
or
Not Currently Available for Direct Purchase