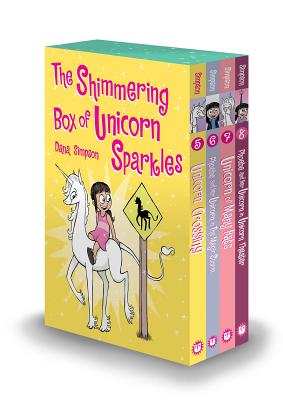 The Shimmering Box of Unicorn Sparkles

An extra-special, extra-sparkly box set of Phoebe and Her Unicorn friendship, adventure, and fun!

Phoebe and Marigold are back in this second box set of Dana Simpson's bestselling series, including two hilarious comics collections and both full-length Phoebe and Her Unicorn graphic novels! Life is never boring when you have a unicorn for a BFF, especially one as enchanting as Marigold Heavenly Nostrils.

Join the lovable pair for year-round fun, embarking on investigations into magical storms, invitations to goblin parties, and rainbow pod journeys to drama camp. Though it's easy to travel in style with a shimmering chauffeur like Marigold, growing up is still a difficult journey. Luckily, Phoebe and Marigold have each other through all the magical mayhem.

She currently lives in Santa Barbara, California, with her tech genius spouse and her fairly stupid cat.
or support indie stores by buying on