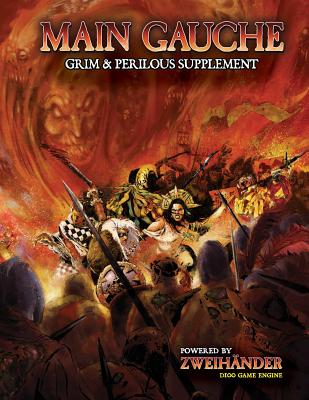 CHAOS IS NOT A PIT—IT IS A LADDER.

Using this book, you will be able to:

Using the Powered by ZWEIHÄNDER d100 game engine, this book expands your options into the realm of chaos and beyond. MAIN GAUCHE is suited for running low and dark fantasy games, along with Renaissance and medieval-style adventures. You can also use this book to create your own homebrewed worlds, whether inspired by the works of Andrzej Sapkowski’s The Witcher, George R.R. Martin’s Game of Thrones, Glen Cook’s Black Company, Myke Cole’s The Sacred Throne, Robert E. Howard’s Solomon Kane, Scott Lynch’s Gentlemen Bastards or other grimdark-inspired media.

With a total of 186 unique Professions and over 300 spells across ZWEIHÄNDER and MAIN GAUCHE, you now have countless ways to create your own vision of grim characters ready to embark upon perilous adventures. Embrace the left-handed path of MAIN GAUCHE, where chaos awaits!

Daniel D. Fox is the executive creative director of games at Andrews McMeel Publishing. He won two gold ENNIE Awards at Gen Con for Best Game and Product of the Year with his fantasy horror game ZWEIHANDER RPG. When Daniel isn't designing tabletop role-playing games or board games, he's enjoying his other favorite hobby: cafe racer motorcycles. He lives in the City of Fountains with his wife Ali and their two young kobolds.
Loading...
or support indie stores by buying on