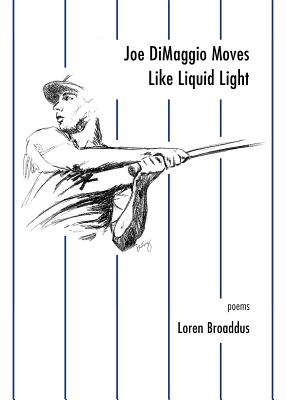 A collection of poetry and quotes about baseball—and about so much more. The diamond is the backdrop for Loren Broaddus’s exploration of nostalgia, family, race, jazz, and the winding hallways of history. Joe DiMaggio is sometimes domestic, sometimes political—microscopic here, aerial there. While Broaddus’s poems may start at home plate, he sends them flying in all directions: sometimes into left field, sometimes out of the park entirely.

With a unique attraction for baseball game fans ( a sport often described as poetry in motion played out on a field of dreams), "Joe DiMaggio Moves Like Liquid Light: Poems" will prove to be an immediate and enduringly popular addition to both community and academic Contemporary American Poetry collections.  (Midwest Book Review)

Loren Broaddus was born and raised in Springfield, Missouri, where he lives with his wife Marilyn, their two children, and their dog Barney. They are his inspiration.

Loren cannot remember a time when he did not love baseball and the Kansas City Royals. His father grew up listening, with his father, to Harry Caray call St. Louis Cardinals games on the radio, while his mother loved Mickey Mantle and the New York Yankees. Eventually, their marriage compromise was to become Kansas City Royals' fans. The Royals on the radio was a constant every summer.

Writing poetry became a passion after taking a creative writing class in college at Drury University, taught by Jo Van Arkel. From there, he wrote poems for years on scrap paper, on the backs on green passes, and in notebooks he thought no one else would ever see.

Loren has taught History for over twenty-five years for Springfield Public Schools.He is the recipient of the DAR State of Missouri History Teacher of the Year Award in 2015, and was a Finalist for Springfield Public Schools Teacher of the Year in 2016, yet, he insists, the best thing about teaching is the kids.
Loading...
or
Not Currently Available for Direct Purchase