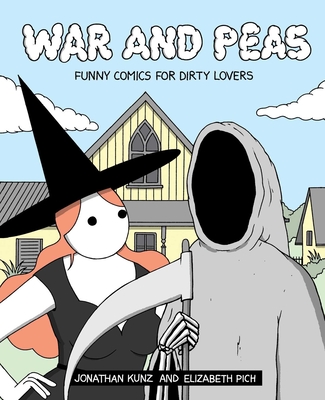 "Hilarious, morbid, and sometimes oddly touching, War and Peas is among the best of the best in modern comics. You'll be laughing out loud." — Sarah Andersen, creator of Sarah's Scribbles

"One of the most exciting and funniest webcomics in the world," — Bored Panda

From the creators of the hugely popular Instagram comic War and Peas, this offbeat four-panel comic features a dark, fairy-tale aesthetic and a twist ending each time. War and Peas: Funny Comics for Dirty Lovers combine twisted humor with a beloved cast of characters including the grim reaper (seen here as an unintentionally lethal man of leisure), a robot in hopelessly in love with his scientist creator, and a promiscuous yet self-assured witch. Unlike most webcomic collections, this one tells a story using dozens of never-before-seen comics to chronicle the lives of several different characters and their follies during life, death, and their glorious reunions in the afterlife (and the after-afterlife).

Elizabeth Pich and Jonathan Kunz are comics artists who live and work in Saarbrücken, Germany. Pich and Kunz met at art school, and began their collaboration in 2011. What started out as a blog for silly doodles and nonsensical comics eventually turned into a weekly comic strip with an enthusiastic and rapidly growing fan base. War and Peas strips give a funny look at different types of situations, mostly dealing with unfulfilled desires, humans and technology, and generally have a sad twist ending. The authors write together and usually alternate drawing.
Loading...
or support indie stores by buying on