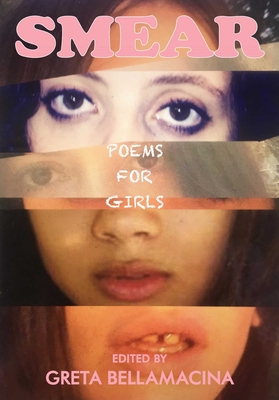 A vivid, powerful anthology of poems by and for young women, giving voice to a new generation of international poets, with themes of feminism, empowerment, resilience, confidence, and integrity.

SMEAR: Poems For Girls presents a curated, all-female lineup of poets from different countries and addresses issues of trauma, survivorship, independence, and body positivity. As described on Dazed.com: "The poetry collection celebrating the imperfect, frank woman, SMEAR is chronicling the voices of women, unapologetically confronting self-image, body autonomy and our relationships with each other."

The first North American edition of SMEAR will include an expanded selection of poems from international woman poets.


Praise For SMEAR: Poems for Girls…

"A powerful and sincere anthology of pieces from many incredible female poets. The poems here cover a range of important themes and strike the heart on every page." (Goodreads)

Greta Bellamacina is an actress, filmmaker, and poet. She was born in London and made her acting debut in Harry Potter and the Goblet of Fire at the age of thirteen. She trained at RADA, where she performed a variety of lead theatre roles, before going on to get a B.A. in English at King’s College London. Her feature film Hurt by Paradise is currently in post-production.

Andy Warhol's Interview magazine says Greta “is garnering critical acclaim for her way with words and her ability to translate the classic poetic form into the contemporary creative landscape."
Loading...
or
Not Currently Available for Direct Purchase