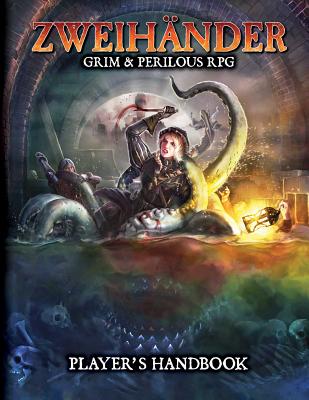 EVERYTHING A PLAYER NEEDS TO CREATE A CHARACTER FOR ZWEIHÄNDER GRIM & PERILOUS RPG.

Abridged from the first ten chapters of ZWEIHÄNDER Revised Core Rulebook, this book contains everything you need to create a character: from professions & advancement, to backgrounds & skills, for intrigue & combat, to exploration & trappings, and magick spells & rituals.

Using this book, you will embroil your character in low fantasy & dark fantasy adventures, inspired by the worlds of Game of Thrones, The Witcher, Solomon Kane, Black Company, The Sacred Throne, Gentlemen Bastards and other Renaissance-styled, ‘grimdark’ inspired works.

With 72 professions, 43 expert professions, 10 ancestries, numerous backgrounds, a myriad of weapons, character sheets in both horizontal & vertical format and over 160 magick spells & rituals, you’ll have countless ways to create your vision of a grim character ready to embark upon perilous adventures.

ZWEIHÄNDER AWAITS, AND THE FATE OF YOUR GRIM & PERILOUS TALE HANGS IN THE BALANCE!

Daniel D. Fox is an author and game designer, having won the gold ENnie for Best Game and Product of the Year at Gen Con 2018 for ZWEIHÄNDER Grim & Perilous RPG. His break-out success with ZWEIHÄNDER was featured on Forbes.com, and recognized by Kickstarter as one of their Projects We Love. His first game ZWEIHÄNDER is ranked one of the best-selling tabletop games of all time at DriveThruRPG, with over 90,000 copies sold worldwide. He is the founder of Grim & Perilous Studios, an independent publisher of over 30 titles since its inception. Daniel also wrote DARK ASTRAL and MAIN GAUCHE, and is the lead designer for both COLONIAL GOTHIC Grim & Perilous RPG and TETSÅªBO Grim & Perilous RPG – all-new tabletop games using the Powered By ZWEIHÄNDER d100 game engine.

Daniel was featured on the front page of Twitch during Gen Con 2018. His popular website GrimAndPerilous.com hosts numerous articles every week on tabletop game design using the Powered By ZWEIHÄNDER system, while his Twitter @ZweihanderRPG attracts hundreds of designers and creative influencers in the tabletop gaming community. As a full-time digital sellsword, Daniel lives in the heart of Kansas City with his loving wife and their three year old kobold.

Daniel is the Executive Creative Director of Games at Andrews McMeel Universal. He can also be found on social media using the hashtags #ZweihanderRPG and #GrimAndPerilous
Loading...
or
Not Currently Available for Direct Purchase