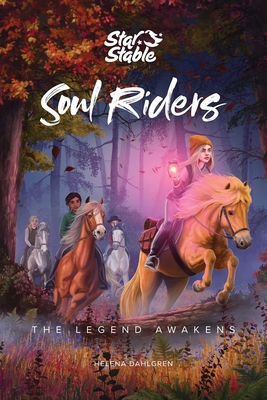 Step into the second installment of the massively popular adventure game Star Stable, and follow four friends who discover their magic powers and learn that every girl can be a hero in this fantasy trilogy.

The Soul Riders series tells the heroic tale of four young girls who have been chosen by destiny to save the world from the ancient demon: Garnok and his band of dangerous Dark Riders.

Having split up on their own individual missions at the end of book 1, the Soul Riders are now in increasing danger. In a desperate act, Anne manages to save her friends by using her newfound magical abilities. Together again, the Soul Riders feel their powers intensify as they work in unison for the first time. The legend awakens as they start their training with the druids and learn who they are and what it means to be a Soul Rider.

To truly master their powers they must obtain a book that is kept by the witch Pi who was once an ally to the druids, but now has turned on them. When they return to the druids, they learn that a magical rift has been opened up threatening to destroy Winter Valley and the thousands who live there. Linda has visions of the dark and terrible fate that awaits if the Dark Riders succeed. But worst of all, they realize that they are the ones who caused the rift and have no choice but to ride out together to try and neutralize the threat . . .

The Legend Awakens is the second installment in the epic, fantasy trilogy, Soul Riders, about magic, friendship, and horses bound to thrill all young equestrian fans.

Star Stable is an immersive adventure game and a social platform for girls, where they can come together and share an amazing experience full of magic, adventure, and mystery. Joining the Soul Riders in their epic quest to protect the island of Jorvik from the forces of darkness, players explore a fantastic world on horseback together with their friends. Star Stable Online is available in 14 languages and has an engaged community of players from all over the world. The game is developed by Star Stable Entertainment, a Swedish company founded in 2011. Besides the Star Stable game, they create apps, music and stories for girls of all ages. Find out more and help protect the magical island of Jorvik at www.starstable.com.
Loading...
or support indie stores by buying on