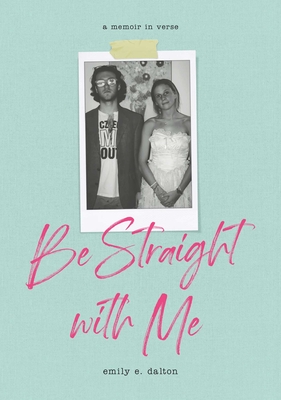 Be Straight with Me

Be Straight with Me is an unforgettable memoir-in-verse about a love that blurs the boundaries of gender and sexuality—told from the perspective of a young, straight woman who finds herself in a serious relationship with her gay male best friend. With unabashed honesty and piercing emotional clarity, Emily Dalton brings to life this timely, true story about a nonconforming romance and its consequences.

During her sophomore year at Middlebury College, Emily meets Max—“you” as she intimately refers to him in the book. Not exactly a tomboy, but not quite a girly girl either, Emily is intent on finding a masculine boyfriend to assuage a deeply rooted fear that she may not be quite feminine enough.

Max—a boisterous class clown beloved by his many straight guy friends—has recently come out as gay and is embracing his newly claimed identity. Initially, Max and Emily dislike each other, but end up growing close after a make-out dare on Halloween. Then one night, Max reveals an unexpected physical attraction that catches them both by surprise. The relationship begins, playfully and in secret, and then spirals into something more.

Max and Emily’s journey takes many forms—they experiment with drugs; they travel abroad; they try sleeping with other people (together), and everything in between—all in the name of “this bizarre, beautiful thing” they call love.

Emily Dalton grew up in rural northern Connecticut and studied writing at Middlebury College in Vermont. At the age of 25, after three years of living in New York City, she quit her job, moved home, and turned her focus back to writing. While working part-time as a blacksmith's apprentice, she slowly transformed her senior thesis into the first draft of Be Straight with Me. Emily has since returned to Brooklyn, where she works in advertising and is learning to grow bonsai trees.
Loading...
or
Not Currently Available for Direct Purchase