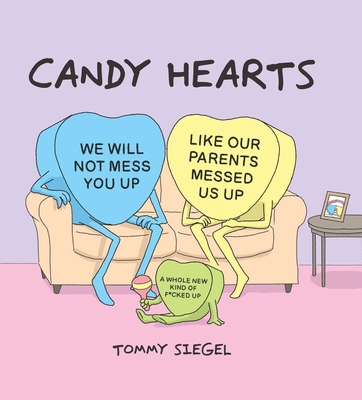 Tommy Siegel's Candy Hearts comics offer a hysterical window into the many ways romantic couples are not at all on the same page.


From the awkwardness of flirting during a pandemic to scrolling through disastrous dating profiles, Candy Hearts hilariously captures the secrets, lies, and misunderstandings behind every relationship. With dozens of never-before-seen comics and a special Candy Hearts sticker set, this book is the perfect Valentine’s Day (or Anti-Valentine’s Day) gift for your friends, lovers, or even yourself.

Tommy Siegel is a cartoonist and musician who tries his best to juggle both pastimes with assistance from copious amounts of coffee. As lead guitarist and singer for his solo projects and his power pop trio Jukebox The Ghost, Tommy has played over 1,000 shows around the world, including festivals like Bonnaroo and Lollapalooza and late-night television programs like Letterman and Conan. As a cartoonist, his challenge to draw 500 consecutive days of comics led to a viral fanbase of hundreds of thousands worldwide.
Loading...
or support indie stores by buying on