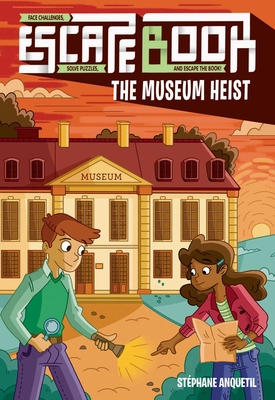 Overcome challenges, solve puzzles, and uncover the true culprit in the fourth installment of the Escape Book series!

What started as a typical family vacation takes a turn for the worse when you and your grandfather, a security guard at the local museum, find yourselves at the center of a serious scandal. It turns out that one of the museum’s masterpieces was stolen on the same night you and your grandfather were taking an after-hours tour—since you were the only two people there, you’re the prime suspects! To prove your innocence, you must now find the stolen masterpiece by observing, analyzing, and investigating like a real detective! Are you ready for an adventure?

Stéphane Anquetil is an old-school geek. He started playing video games when he was twelve on something called a Videopac G7200. The Choose Your Own Adventure books were an important part of his adolescence, as were text-based adventure games—the real ones, like where you had to write, “Talk cat,” to talk to a cat. After rediscovering a love of board games and writing, today he’s become an author of clever tales equally inspired by historical archives, secret codes, and strange mysteries.
Loading...
or support indie stores by buying on