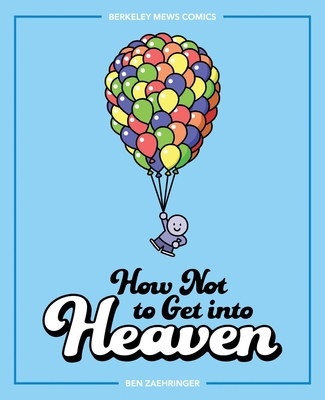 How Not to Get into Heaven

If you're looking for an easy way to get into heaven, by all means do NOT read this hilarious, subversively clever, comic-filled book!

The second collection of Berkeley Mews comics by Ben Zaehringer, this book satirizes many of the pop cultural institutions familiar to children of the '80s and '90s, providing a visually delightful and comically poignant send-up of modern life.

Filled with flawed views of Santa Claus, hilarious takedowns of Disney movie tropes, and dozens of comics that landed on the front page of Reddit, How Not to Get into Heaven is an uplifting read for comics fans with a slightly twisted sense of humor.

Ben Zaehringer was born in Glendale, California in 1988. He graduated from the University of California, Berkeley in 2010 with a degree in Film Studies. In 2009, he began the webcomic Berkeley Mews, a darkly-comic send-up of pop culture nostalgia that has been featured in BuzzFeed, Savage Dragon, and on the front page of Reddit. He also draws In the Bleachers, a sports-themed nationally-syndicated daily newspaper strip, and has written several gags for the Reuben Award-winning comic strip Rhymes with Orange. In 2015, he was the Artist-in-Residence at the Charles M. Schulz Museum and Research Center in Santa Rosa, California. In 2018, he illustrated the food-themed card game Hangry Thief. His first collection of Berkeley Mews comics, Sorry I Ruined Your Childhood, was released on October 1st, 2019. He lives in San Francisco with his wife, Edith, and their two cats.
Loading...
or support indie stores by buying on