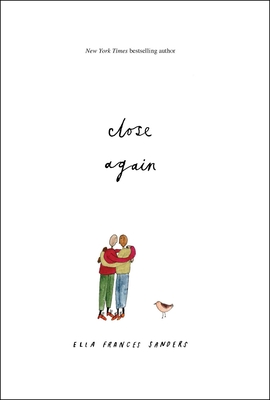 New York Times bestselling author Ella Frances Sanders presents the book we all must have to remind ourselves of the things we miss from our pre-2020 lives and the things we will enjoy again, such as standing next to people in a coffee shop, at the movie theater, or in the bookstore....

This book is a meaningful and personal illustrated collection of place, of chance, and of love. Moments, interactions, experiences, collisions, events, places, serendipities—the things that we all, as a collective and in-waiting humanity, are longing to fold back into. The carefree, now-historical moments of before that we dream about: the crossing of paths, the potential which was held within each day, the beautiful accidents of being alive that are not currently able to happen in the same ways.

It allows a person reading it some space to consider their own missing, the chances left untaken and the stones left unturned. In a soft and beautiful way, it reminds us that the small things we as individuals choose to ascribe value to are valuable, that the meaning that makes up our days and weeks and months, if taken away, can leave us feeling directionless and full of emotional aches.

Within the space of the book is hope, and reflection, and the assurance that we will all be close again.

Ella Frances Sanders is an internationally-bestselling author and illustrator of three books. She lives near a windswept coastline in Ireland.

Her first book, Lost in Translation: An Illustrated Compendium of Untranslatable Words was published in September 2014 by Ten Speed Press and became an international bestseller. It sat on the New York Times bestseller list for 4 consecutive months, was an Amazon Best Book of 2014, and has had multiple printings in multiple countries, including Japan where over 100,000 copies have been sold. It was featured in places such as The New York Times Book Review, The New York Post, Entertainment Weekly, The Huffington Post, Brain Pickings, Design*Sponge, Conde Nast Traveler, and Buzzfeed. In 2018, Lost in Translation was announced as the No.1 book for the biggest bookseller in Japan, Kinokuniya, which is only the second time a non-fiction title has ever been chosen for the award in the bookseller’s history.

The Illustrated Book of Sayings: Curious Expressions from Around the World was published in September 2016 by Ten Speed Press and has also been printed in over eight languages. The Illustrated Book of Sayings made the San Francisco Chronicle, Fathom, and LA Times gift guides. It was one of Mental Floss’s 10 Must Read Books For Fall and featured by websites like It’s Nice That, The Telegraph, CityLab, and The Times of India.

Her third book, Eating the Sun: Small Musings on a Vast Universe, was published by Penguin on April 16th 2019 to a starred review from Publishers Weekly, and another good one from Kirkus. It was the recipient of the 2019 Whirling Prize for prose, and has been translated into languages including German, Japanese, Spanish, and Italian, with a UK edition published under the title A Small Illustrated Guide to the Universe by Blink Publishing.
Loading...
or support indie stores by buying on