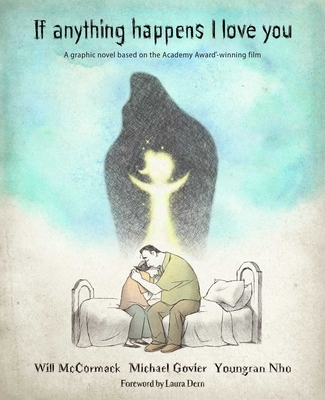 If Anything Happens I Love You

Unimaginable loss yields to the power of human connection in this simple, moving story from the filmmakers of the eponymous Oscar-winning film.

An elegy on grief.

Based on the Academy Award-winning animated short by the same name, If Anything Happens I Love You is a young adult graphic novel that follows two parents as they reckon with the loss of their young daughter, Rose, in a school shooting. Readers follow Rose from “above” as she watches her parents slowly break down under the weight and pain of their loss. Throughout the novel, Rose’s soul seeks to help her parents reconnect. We learn who Rose was and how much life she lived in her short time.  By incorporating a wide range of characters, her boyfriend, teacher, and her cat, Rose is able to introduce healing into the lives of the people she left behind. If Anything Happens I Love You may be a story about loss, but in it we see ourselves—in the grief, the pain, and, most importantly, in the fight toward human connection, love, and acceptance.

Praise For If Anything Happens I Love You…

KIRKUS STARRED REVIEW:
IF ANYTHING HAPPENS I LOVE YOU
BY WILL MCCORMACK & MICHAEL GOVIER; ILLUSTRATED BY YOUNGRAN NHO RELEASE DATE: SEPT. 6, 2022

Grieving parents find their ways back together.

A companion to the Oscar-winning short film of the same name, this graphic novel brings new elements to a story that has, horribly, become a familiar narrative in American life. In the aftermath of a school shooting that takes their daughter’s life, a father and mother must rediscover love in a world that’s been leached of color. Their daughter’s soul—“the part of you that is really you”—helps them along, bringing forth memories of her joyful life and enabling them to process her tragic—and tragically preventable—death together. With any exercise in adaptation, there is the question of harnessing medium specificity; this work more than rises to the challenge. McCormack, Govier, and Nho, the animated movie’s co-creators, take their successful cinematic story concept and give it new life with the addition of a carefully written text that explicates the philosophy at the heart of the original. Scenes are reordered to relate to one another in new ways, and characters are endowed with enriched backstories. The cat, an adorable fixture of the film, takes on a moving new role. The result is a book that holds its own, settling comfortably into its own niche, ready to welcome a new audience. Shadows, silhouettes, and occasional washes of color are expertly used to increase the emotional impact. Main characters have paper-white skin and straight, dark hair.
Heavy pain exquisitely rendered.(Graphic fiction. 12-18)
Pub Date: Sept. 6, 2022

Will McCormack is an author, screenwriter, producer, director and actor.

He recently won the Academy Award for Best Animated Short Film for IF ANYTHING HAPPENS I LOVE YOU which he co wrote and co directed with Michael Govier - a film about parents grieving the death of their daughter killed in a school shooting. The film is currently streaming on Netlfix.

As a writer, Will was nominated for an Independent Spirit Award for CELESTE AND JESSE FOREVER, co written with Rashida Jones. Other writing credits include TOY STORY 4 and A to Z on NBC. He’s currently adapting Neal Shusterman’s novel CHALLENGER DEEP for Disney Plus

Will and his producing partner Rashida Jones produce the hit show CLAWS on TNT. They also produce KEVIN CAN F HIMSELF, a new series on AMC starring Annie Murphy.

As an actor Will won a Lucille Lortel award for his performance in Pulitzer Prize winning playwright Paula Vogel’s play  “A LONG CHRISTMAS RIDE HOME”. He has appeared in dozens of films and TV shows including THE SOPRANOS and BROTHERS AND SISTERS.

He won an Academy Award in 2021 for the short animated film IF ANYTHING HAPPENS I LOVE YOU with his co-creator Will McCormack - a film about parents grieving the death of their daughter killed in a school shooting.  The film can be seen currently on Netflix.

He is presently working on an animated feature film and another animated short.

As an actor Michael played Eugene in the film Eugene directed by Spencer Susser and produced by Roman Coppola, The Directors Bureau and Blue Tongue Films.  He has been on This is Us on NBC, Dollface on Amazon, Just Add Magic on Amazon, Alex Inc. on ABC, and reoccurring roles on Conan on TBS.  He has appeared in dozens of national commercials, numerous short films, in many stage plays and live improvised shows.

As a playwright Michael has written many stage plays including The King’s Proposal, which was Highly Recommended in the Chicago Reader and Critics Pick in Time Out Chicago.  He has just finished his newest play Hamlet’s Dead?  You can follow him on Instagram @drgovier

Growing up in S. Korea, Youngran moved to Los Angeles, CA to study at CalArts from 2014-2017. Since graduating, she has been working as a freelance animator / director. Her works include the "LayBack" animated music video featuring the artists Lo/Hi and a short animated film based on Ian Urbina's journal "The Outlaw Ocean".

Her recent work involved her working as the animation director for the short film "If Anything Happens I Love You", directed by William McCormack and Michael Govier. Currently, Youngran is currently storyboarding on the upcoming animated feature starring Jamie Foxx called "Groove"

Since she was little, she used to draw cartoons on sketchbooks and share them with their friends. It was so fascinating to her that her cartoons made people smile, laugh, and cry. It became her dream to be an animation director to deliver messages within her stories to people through her films.
In addition to her job, Youngran is also working on a script for her own independent film.
Loading...
or support indie stores by buying on