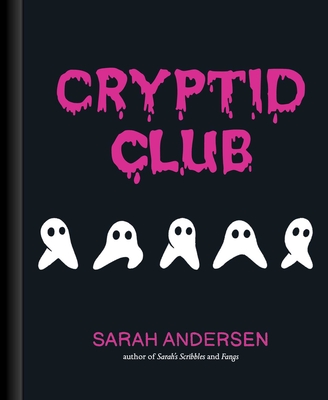 The latest from New York Times bestselling, Goodread's Choice Award-winning, Eisner Award-nominated and Ringo Award-winning author Sarah Andersen is a delightful peek into the secret social lives of some of the world's most fascinating, monstrous, and mysterious creatures.

Do you hate social gatherings? Dodge cameras? Enjoy staying up just a little too late at night? You might have more in common with your local cryptid than you think! Enter the world of Cryptid Club, a look inside the adventures of elusive creatures ranging from Mothman to the Loch Ness Monster. This humorous new series celebrates the unique qualities that make cryptids so desperately sought after by mankind (to no avail). After all, it's what makes us different that also makes us beautiful.

Sarah Andersen’s debut book, Adulthood is a Myth, was the 2016 Goodreads Choice Award Winner for Graphic Novels and Comics. She also won the award for Big Mushy Happy Lump in 2017, and Herding Cats in 2018. Her graphic novel Fangs was nominated for an Eisner Award and appeared on The New York Times best seller list.

Sarah Andersen is a cartoonist and illustrator in her twenty-somethings. She graduated from the Maryland Institute College of Art in 2014 and currently lives in Portland, Oregon. Her semi-autobiographical comic strip, Sarah’s Scribbles, finds the humor in living as an introvert with beloved pets and the continual struggles with waking up in the morning, being productive, and dealing with social situations.