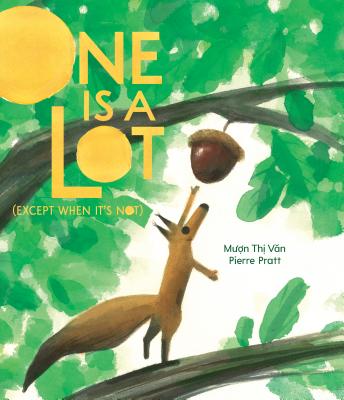 One Is a Lot (Except When It's Not) (Hardcover)

Bestselling and critically acclaimed author M??n Th? V?n offers an innovative and thought-provoking look at the question, How many is enough? Simple page by simple page, young readers are shown examples of how, when counting things, the smallest numbers --- 0, 1 and 2 --- can mean a little, a lot or just the right amount. With its playful spirit and lyrical text, this unique, philosophical picture book promotes critical thinking, observation and discussion, even among the youngest children, and introduces a new way to appreciate numbers. Full of energy and humor, Pierre Pratt's illustrations tell a story within the story that adds a separate narrative layer to the spare text.

Muon Thi Van is the critically-acclaimed author of In a Village by the Sea, which was a JLG selection and the winner of the 2016 Northern California Book Award for Best Picture Book. Her second book, The Little Tree, received starred reviews from Kirkus Reviews and Publishers Weekly. Muon lives in Northern California with her family.

Pierre Pratt is an internationally acclaimed illustrator of over fifty books for children. Pierre's honors include three Governor General's Awards for Illustration and a prestigious Golden Apple Award. He divides his time between Lisbon, Portugal, and Montreal, Canada.


Praise For One Is a Lot (Except When It's Not)…

One unique picture book with much to say equals quite a lot.—Kirkus Reviews, starred review
or support indie stores by buying on
Copyright © 2020 American Booksellers Association