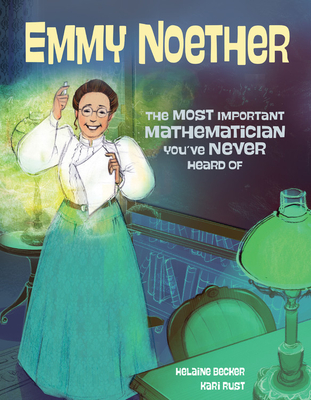 The Most Important Mathematician You've Never Heard Of

In this engaging and inspiring biography, a groundbreaking but relatively unknown woman finally gets her due as one of the most influential mathematicians of the twentieth century.Emmy Noether is not pretty, quiet, good at housework or eager to marry --- all the things a German girl is expected to be in her time. What she is, though, is a genius at math. When she grows up, she finds a way to first study math at a university (by sitting in, not actually enrolling) and then to teach it (by doing so for free). She also manages to do her own research into some of the most pressing math and physics problems of the day. And though she doesn't get much credit during her lifetime, her discoveries continue to influence how we understand the world today.Bestselling and award-winning Helaine Becker has crafted an engaging look at the life of Emmy Noether, a contemporary of Einstein's and one of the most influential, though little known, mathematicians of the twentieth century. Despite the obstacles she faced as a woman in a male-dominated field, and as a Jew who had to flee the Nazis, Emmy still accomplished a great deal. Artwork by Kari Rust uses touches of humor for emphasis and a golden glowing effect around Emmy to visually express her brilliance and ideas. Back matter includes a biographical note, explanations of complex mathematical concepts and suggestions for further reading. There are curriculum links to physics and mathematics --- subjects portrayed here as fascinating and exciting --- and poignant real-life character education lessons on courage and perseverance.

Praise For Emmy Noether: The Most Important Mathematician You've Never Heard Of…

A vivid biographical depiction of history, math, science, and the importance of women in STEM.—Kirkus Reviews

Girls as well as boys will enjoy learning about Emmy Noether.—Association of Jewish Libraries

... leaves a strong impact on readers about Noether's impressive achievements, both as a mathematician and as an example of women's intellectual creativity and empowerment—Jewish Book Council

Helaine Becker is a bestselling children's author of more than ninety books, including Hubots, Monster Science, Zoobots, The Big Green Book of the Big Blue Sea and Lines, Bars and Circles. She is a two-time recipient of the Lane Anderson Award and a winner of the Silver Birch Award and the Red Cedar Award. She lives in Toronto, Ontario.
Loading...
or support indie stores by buying on