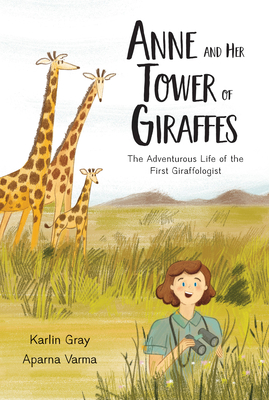 Anne and Her Tower of Giraffes

The Adventurous Life of the First Giraffologist

The remarkable true story of how a young girl's never-wavering fascination with the world's tallest animal leads her to become the first giraffologist: Dr. Anne Innis Dagg.

Anne was three years old when she first laid eyes on a giraffe. As her blue eyes gazed into the giraffe's big brown eyes at the zoo, she was mesmerized. And she never forgot it. Her desire to study the beautiful, graceful creatures followed her from preschool to graduate school. Often, she was laughed at for her interest. The scientific study of giraffes didn't exist at the time. And it certainly wasn't an appropriate pursuit for a woman --- or so she was told. So, Anne decided she would teach herself about her favorite animal. She traveled to South Africa alone --- and shocked everyone by studying giraffes in the wild!

This inspiring picture book biography by Karlin Gray is based on the true story of Dr. Anne Innis Dagg, the pioneering female scientist who was the world's first giraffologist and the first scientist to study wild animal behavior in Africa (four years before Jane Goodall!). Aparna Varma's expressive art evocatively brings the story to life. A core theme is how Anne never abandons her interest in giraffes, despite setback after setback. When she was rejected by academia, she became a successful writer, completing over 20 books. A 2018 documentary about her life brought long-overdue recognition to her contributions. This book supports a growth mindset in overcoming adversity and charting one's own path, and character education lessons on resilience. It has strong curriculum connections in life science and the characteristics of living things. The end matter includes an afterword, bibliography and the author's Q&A with Dr. Dagg, which adds personal details to her life story.

Karlin Gray is the author of several books for children, including Serena: The Littlest Sister, a picture book biography of Serena Williams. She holds a BA in creative writing from Florida State University. Karlin lives with her family in Westport, Connecticut.
Aparna Varma works in animation production and is the owner of stationery company Green Bean Studio. Born and brought up in India, she spent many of her formative years in Botswana and now dreams and draws in Toronto, Ontario.
Loading...
or support indie stores by buying on