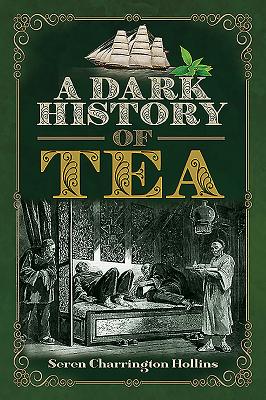 A Dark History of Tea (Hardcover)

A Dark History of Tea looks at our long relationship with this most revered of hot beverages. Renowned food historian Seren Charrington-Hollins digs into the history of one of the world's oldest beverages, tracing tea's significance on the tables of the high and mighty as well as providing relief for workers who had to contend with the ardours of manual labour.

This humble herbal infusion has been used in burial rituals, as a dowry payment for aristocrats; it has fuelled wars and spelled fortunes as it built empires and sipped itself into being an integral part of the cultural fabric of British life. This book delves into the less tasteful history of a drink now considered quintessentially British. It tells the story of how, carried on the backs of the cruelty of slavery and illicit opium smuggling, it flowed into the cups of British society as an enchanting beverage.

Chart the exportation of spices, silks and other goods like opium in exchange for tea, and explain how the array of good fortunes - a huge demand in Britain, a marriage with sugar, naval trade and the existence of the huge trading firms - all spurred the first impulses of modern capitalism and floated countries.

The story of tea takes the reader on a fascinating journey from myth, fable and folklore to murky stories of swindling, adulteration, greed, waging of wars, boosting of trade in hard drugs and slavery and the great, albeit dark engines that drove the globalisation of the world economy. All of this is spattered with interesting facts about tea etiquette, tradition and illicit liaisons making it an enjoyable rollercoaster of dark discoveries that will cast away any thoughts of tea as something that merely accompanies breaks, sit downs and biscuits.