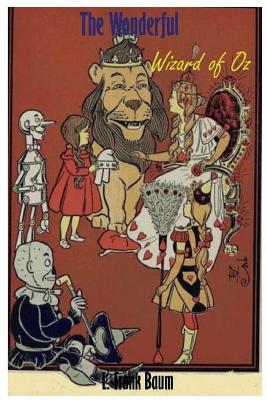 The Wonderful Wizard of Oz (Paperback)

The Wonderful Wizard of Oz is an American children's novel written by author L. Frank Baum and illustrated by W. W. Denslow, originally published by the George M. Hill Company in Chicago on May 17, 1900. It has since been reprinted on numerous occasions, most often under the title The Wizard of Oz, which is the title of the popular 1902 Broadway musical as well as the iconic 1939 musical film adaptation. Dorothy is a young girl who lives with her Aunt Em and Uncle Henry and her little dog Toto on a Kansas farm. One day, Dorothy and Toto are caught up in a cyclone that deposits her farmhouse into Munchkin Country in the magical Land of Oz. The falling house has killed the Wicked Witch of the East, the evil ruler of the Munchkins. The Good Witch of the North arrives with the grateful Munchkins and gives Dorothy the magical Silver Shoes that once belonged to the witch. The Good Witch tells Dorothy that the only way she can return home is to go to the Emerald City and ask the great and powerful Wizard of Oz to help her. As Dorothy embarks on her journey, the Good Witch of the North kisses her on the forehead, giving her magical protection from harm. On her way down the yellow brick road, Dorothy attends a banquet held by a Munchkin man named Boq. The next day, Dorothy frees the Scarecrow from the pole on which he is hanging, applies oil from a can to the rusted connections of the Tin Woodman, and meets the Cowardly Lion. The Scarecrow wants a brain, the Tin Woodman wants a heart, and the Cowardly Lion wants courage, so Dorothy encourages the three of them to journey with her and Toto to the Emerald City to ask for help from the Wizard. After several adventures, the travelers enter the gates of the Emerald City and meet the Guardian of the Gates, who asks them to wear green tinted spectacles to keep their eyes from being blinded by the city's brilliance. Each one is called to see the Wizard: Dorothy sees the Wizard as a giant head on a marble throne, the Scarecrow as a lovely lady in silk gauze, the Tin Woodman as a terrible beast, the Cowardly Lion as a ball of fire. The Wizard agrees to help them all if they kill the Wicked Witch of the West, who rules over Oz's Winkie Country. The Guardian warns them that no one has ever managed to defeat the witch. wonderful wizard of oz L. Frank baum book original illustrated graphic novel.
or support indie stores by buying on
Copyright © 2020 American Booksellers Association