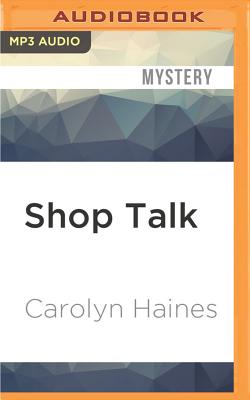 Shop Talk is a madcap adventure that explores sibling rivalry, romantic love, the passion of a group of desperate writers, the dark designs of the CIA, alien DNA, beefalos, Nazis, and spontaneous combustion - all in the coastal town of Biloxi, Mississippi.

When Lucille Hare, wannabe romance writer, joins up with Mona d'la Quirt, Dallas Dior, Jazz Dixon, Andromeda Ripley, and the cheesecake queen, Coco Frappe', all members of Writers of Mississippi Books (WOMB), she finds women who have big dreams and a game plan for survival.

But Lucille must convince her brother and sister-in-law, Bo and Iris Hare, to let her follow her dreams - which may include a relationship with the strange and vivid Driskell LaMont, the night repairman at Bo's television shop.

In the meantime, the evil Marvin Lovelace, former CIA operative, is after Lucille. He needs a plug of DNA for his own black plans involving blackmailing the United States Government.

While the members of WOMB plot their novels (including excerpts of the unforgettable Forbidden Words, Lucille's novel featuring cowboy/poet Slade Rivers) and Bo and Iris ''get frisky'' while acting out old television shows, Marvin moves ever closer to his goal - a plug of Hare.