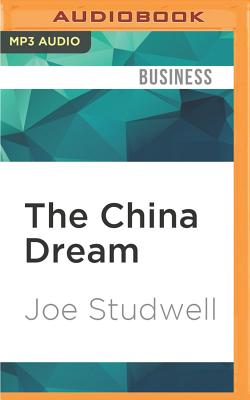 The Quest for the Last Great Untapped Market on Earth

In The China Dream, acclaimed business journalist Joe Studwell takes to task the predictions that China will become an economic juggernaut on the world stage in the 21st century--and instead foresees an economic crisis. He argues that since the days of Marco Polo, Western nations have seen the vast population of the Middle Kingdom as a fantastic opportunity for expanding trade, investing time and resources again and again in the hope to develop it, only to see, century after century, its economy crash and their dreams turn to dust.

Studwell traces the most recent developments in China, from Deng Xiaoping's "liberalization" of its market in the 1980s through the opening of its economy to foreign investment in the 1990s. In his rigorous analysis of the Chinese economy, government, and culture, Studwell also shows the roadblocks to the continuation of the country's unprecedented expansion and why its economy will fail once more--but this time harder than ever before and with potentially catastrophic results. Provocative, flawlessly researched, and endlessly engaging, The China Dream is a book that will have the business and political worlds talking about what's really going on in China--and what we can do to prepare for the coming crisis.