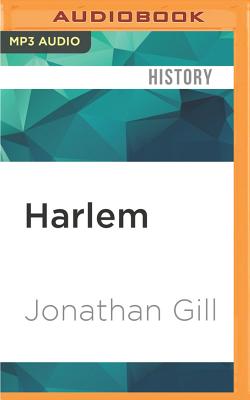 Harlem is perhaps the most famous, iconic neighborhood in the United States. A bastion of freedom and the capital of black America, Harlem's 20th-century renaissance changed our arts, culture, and politics forever. But this is only one of the many chapters in a wonderfully rich and varied history.

In Harlem, historian Jonathan Gill presents the first complete chronicle of this remarkable place. From Henry Hudson's first contact with native Harlemites through Harlem's years as a colonial outpost on the edge of the known world, Gill traces the neighborhood's story, marshaling a tremendous wealth of detail and a host of fascinating figures, from George Washington to Langston Hughes. Harlem was an agricultural center under British rule and the site of a key early battle in the Revolutionary War. Later, wealthy elites, including Alexander Hamilton, built great estates there for entertainment and respite from the epidemics ravaging downtown. In the 19th century, transportation urbanized Harlem and brought waves of immigrants from Germany, Italy, Ireland, and elsewhere. Harlem's mix of cultures, extraordinary wealth, and extreme poverty was electrifying and explosive.