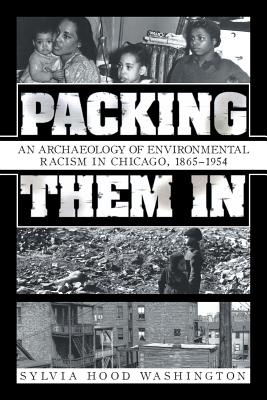 An Archaeology of Environmental Racism in Chicago, 1865-1954

Sylvia Hood Washington's Packing Them In provides strong and often startling evidence of the depths and complexities of environmental racism in Chicago, and offers an innovative historical explanation for how this social ill developed in nineteenth and twentieth century America. Drawing from Michel Foucault's concept of power/knowledge and from theories of racial formation, Washington also demonstrates how the process through which some European immigrant groups were reclassified from non-white to white over time, allowed them to move out of spaces where they faced environmental injustice into spaces of environmental privilege. This argument represents a significant contribution to environmental justice studies and suggests a comparative and relational ethnic studies approach to future treatments of the subject. Packing Them In is a path breaking book and a welcome addition to the fields of environmental history and environmental justice studies.

A pathbreaking book. Sylvia Hood Washington uses Chicago as a case study of how human health inequalities in urban environments change over time. In showing the ways white identity shaped exposure to environmental pollutants in the nineteenth and early twentieth centuries, she provides historical context to the environmental racism identified in the United States in the late twentieth century. Packing Them In is instructive for those seeking to understand the structural origins of the present struggle for environmental justice, and a model for undertaking studies of urban environmental history that address the struggle. This model remains as important today as it was when Packing Them In was first published.

Carl Zimring, Associate Professor and Coordinator of the Sustainability Studies, Pratt Institute and author of Clean and White: A History of Environmental Racism

acking Them In is a path-breaking book that is a must-read for anyone interested in understanding how the social, political, and economic dimensions of urban environmental issues evolve over time. Packing Them In makes a significant contribution to the environmental justice literature as it challenges the notion that racism and inequalities arise solely from black-white dynamics. By using history to understand the evolution of racial and spatial dynamics and by embedding the work in Michel Foucault theoretical framework of power and knowledge, Washington demonstrates the importance of expanding traditional environmental justice frameworks in the analysis of case studies such as these.